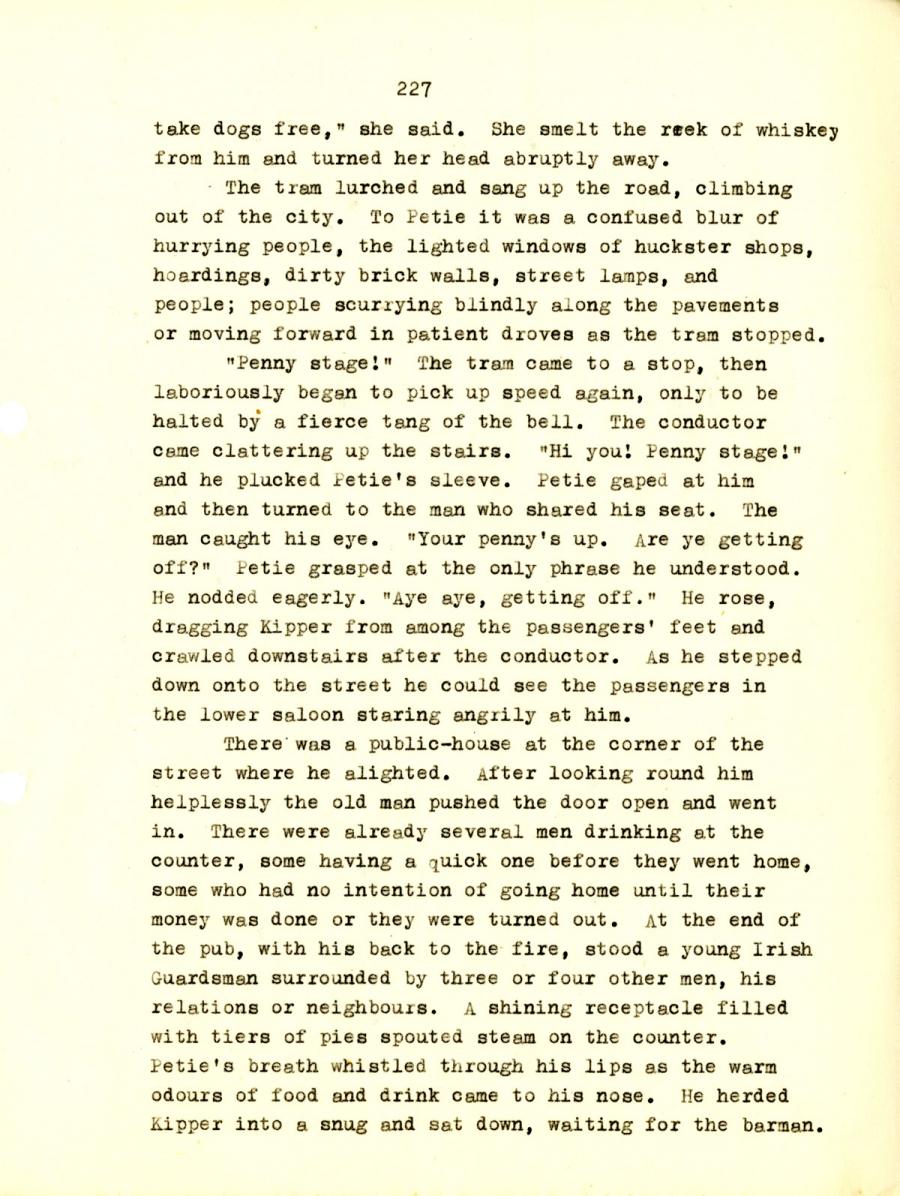 take dogs free,” she said. She smelt the reek of whiskey
from him and turned her head abruptly away.

The tram lurched and sang up the road, climbing
out of the city. To Petie it was a confused blur of
hurrying people, the lighted windows of huckster shops,
hoardings, dirty brick walls, street lamps, and
people; people scurrying blindly along the pavements
or moving forward in patient droves as the tram stopped.

"Penny stage!" The tram came to a stop, then
laboriously began to pick up speed again, only to be
halted by a fierce tang of the bell. The conductor
came clattering up the stairs. "Hi you! Penny stage!"
and he plucked Petie's sleeve. Petie gaped at him
and then turned to the man who shared his seat. The
man caught his eye. "Your penny’s up. Are ye getting
off?" Petie grasped at the only phrase he understood.

He nodded eagerly. "Aye aye, getting off." He rose,
dragging Kipper from among the passengers’ feet and
crawled downstairs after the conductor. As he stepped
down onto the street he could see the passengers in
the lower saloon staring angrily at him.

There was a public-house at the corner of the
street where he alighted. After looking round him
helplessly the old man pushed the door open and went
in. There were already several men drinking at the
counter, some having a quick one before they went home,
some who had no intention of going home until their
money was done or they were turned out. At the end of
the pub, with his back to the fire, stood a young Irish
Guardsman surrounded by three or four other men, his
relations or neighbours. A shining receptacle filled
with tiers of pies spouted steam on the counter.

Petie*s breath whistled through his lips as the warm
odours of food and drink came to his nose. He herded
Kipper into a snug and sat down, waiting for the barman.