The Linen Hall Library has in its collections over a dozen archives belonging to writers who were born or grew up in Northern Ireland. Down through the years, several families and Estates have chosen the Library as the repository for this material, knowing the Institution will provide secure and respectful storage.

In 2016 the Library received funding from the Department for Communities to review the entire collection and choose key parts to digitise and make available online. Working closely with the families and Estates, nine of the collections were chosen to include in the ‘Northern Ireland Literary Archive’.

It was a pleasure to read and examine this material, and hear the writers talk in the letters about their ambitions and dreams, frustrations and setbacks, and then see that striving take form in the completed manuscripts.

The Literary Archive begins in the 19th Century and the work of Samuel Ferguson (1842 – 1916). The two poems here, ‘Conary’ and ‘Deirdre’, form an important part of his work, bringing to life Celtic myth and legend in a wonderfully dramatic and accessible language. The manuscripts themselves are detailed and visually striking, where tales once part of oral history and past translations are transformed through Ferguson’s unique telling.

Over half a century later, and the writers he inspired can be found thinking about their country in an equally imaginative way. These were post-War writers coming to terms with peacetime and a Northern Ireland experiencing triumphs and tragedies every bit as dramatic as those found in Ferguson’s work. But, after the ravages of the war, the writers are focused on a more grounded depiction of life here.

The work of Louis MacNeice (1907 – 1963) is renowned for its longing for a meaningful, substantive life separate from the restrictions of politics and religion. In the letters he sends to George and Mercy McCann, local benefactors and supporters of the Arts, we are given a glimpse of the writer’s life away from the work itself. The letters deal with domestic routines, sport, family, illness, and, to prove the standing MacNeice had at the time, end with a condolence letter from the Prime Minister of Northern Ireland after the poet’s untimely death.

The tough practicalities of being a writer is a theme that runs throughout the letters. The long conversations between Robert Greacen (1920 – 2008) and the poet Derek Stanford further depict the ongoing struggles: the repeated appeals to the Arts Council, the successful and unsuccessful grant applications, the pleasure at seeing one of your own reviews published, and the disappointment when your work is maligned. These were two writers working a time when the rules were being written and the ‘Profession’ was insecure with no real framework underpinning it. But it was also an environment where Literary journals flourished, the newspaper review pages were long and comprehensive, and it was possible to earn a living from intermittent, short-term commissions.

These same debates continue in the letters of John Boyd (1919 - 2013), working in his professional role as a BBC Producer and liasing with a host of writers including Michael McLaverty and St. John Ervine. Throughout the letters Boyd offers encouragement and candour to the writers he commissioned as well as being a champion of the Arts. We see him querying an Irish Times review of a new Brian Friel play, lamenting the direction James Young had brought the Group Theatre, and urging Joseph Tomelty to work harder on a script. But Politics also creeps in, with Boyd despairing at a recent Election which sees ‘the God of reason dethroned’.

W.R. Rodgers’ (1909 – 1969) letters to, once again, George and Mercy McCann further examine the writing life and the search for space to compose the work he would gain great success with. We also see him congratulate the McCanns on their own artistic work, George on a book, Mercy on an exhibition, as well as mourning the passing of their mutual friend Louis MacNeice.

Meanwhile, Joan Lingard’s (1932) ‘Across the Barricades’ is a book that remains important for all those who studied it at school and beyond. This is a children’s book that deals with adult themes, in this case bigotry and prejudice on the streets of seventies Belfast, and treats its young audience with intelligence. In the 200 page manuscript, we see Lingard make copious corrections to the pages as she goes along, sharpening the language, cutting repeated words, and revealing the intense work needed to refine prose until it reaches a deceptive simplicity. The characters are children but the world they are dealing with feels adult and complicated, one of car bombs and sudden death, where the grim realities of violence impinge on the innocence of youth.

The Archive also features the original manuscript of Sam Hanna Bell’s (1909 – 1990) ‘December Bride’. This is a treasured part of Northern Irish Literature and a strong, clear-eyed novel about one woman’s attempt to break free from social convention. The book was controversial, but Hanna Bell was a popular figure in local life who reached out beyond Literature and was loved and listened to by readers and non-readers alike.

Alongside this we have a short excerpt from ‘Hopdance’, an unpublished novel by Stewart Parker (1941 -1988).  Here we see the talent behind ‘Pentecost’ and ‘Northern Star’ employ the lyrical language of those plays for a biographical account of his Belfast childhood.

The Archive also includes two poems by John Hewitt (1907 – 1987), ‘A Little People’ and ‘The Mortal Place’. These poems were written a year before his death and, again, reflect on the violence besetting the country and the desperate search for peace. If the work of Samuel Ferguson is verbose and dramatic, then Hewitt’s poetry is spare and refined, reducing the grandiosity to the few essentials. 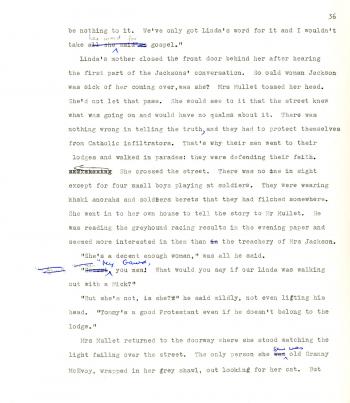