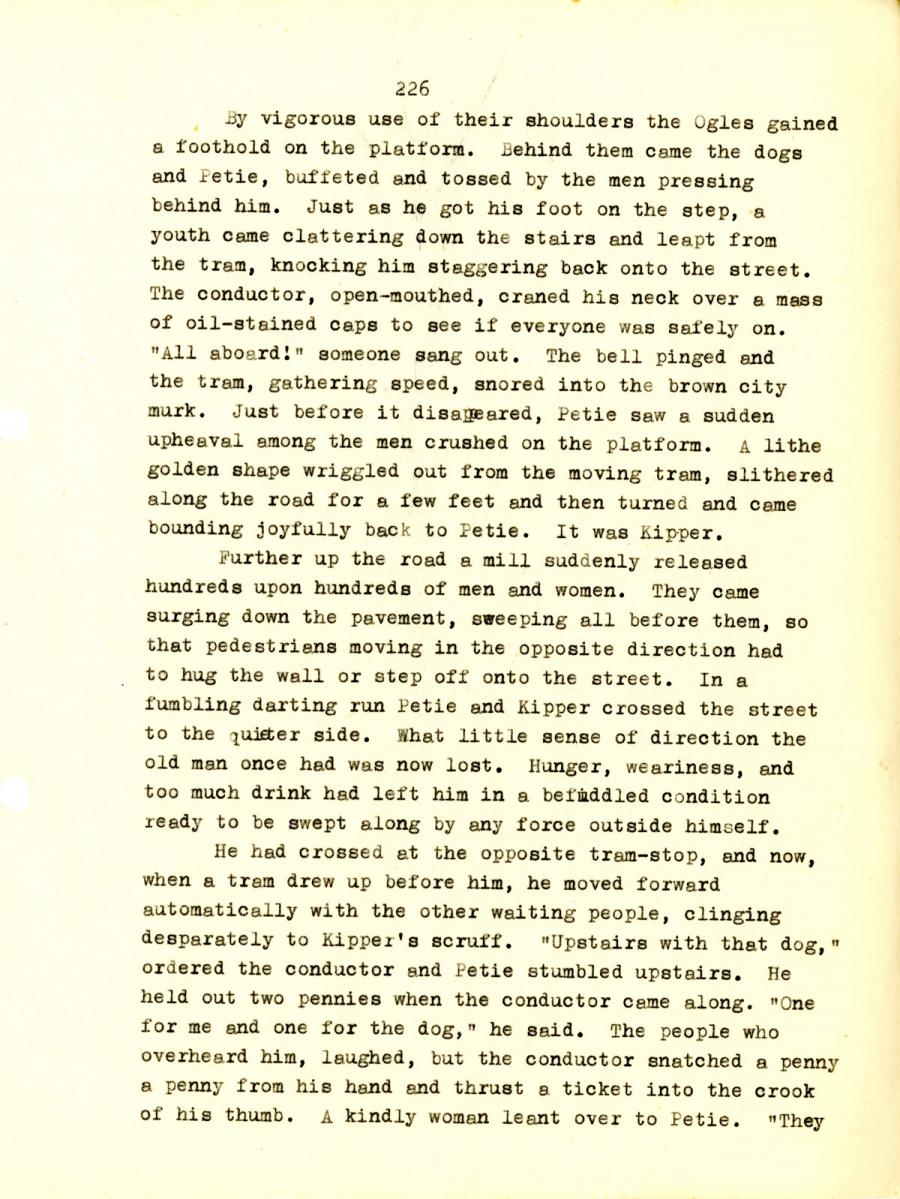 By vigorous use of their shoulders the Ogles gained
a foothold on the platform. Behind them came the dogs
and Petie, buffeted and tossed by the men pressing
behind him. Just as he got his foot on the step, a
youth came clattering down the stairs and leapt from
the tram, knocking him staggering back onto the street.

The conductor, open-mouthed, craned his neck over a mass
of oil-stained caps to see if everyone was safely on.

’’All aboard!" someone sang out. The bell pinged and
the tram, gathering speed, snored into the brown city
murk. Just before it disappeared, Petie saw a sudden
upheaval among the men crushed on the platform. A lithe
golden shape wriggled out from the moving tram, slithered
along the road for a few feet and then turned and came
bounding joyfully back to Petie. It was Kipper.

Further up the road a mill suddenly released
hundreds upon hundreds of men and women. They came
surging down the pavement, sweeping all before them, so
that pedestrians moving in the opposite direction had
to hug the wall or step off onto the street. In a
fumbling darting run Petie and Kipper crossed the street
to the quieter side. What little sense of direction the
old man once had was now lost. Hunger, weariness, and
too much drink had left him in a befuddled condition
ready to be swept along by any force outside himself.

He had crossed at the opposite tram-stop, and now,
when a tram drew up before him, he moved forward
automatically with the other waiting people, clinging
desparately to Kipper’s scruff. "Upstairs with that dog,"
ordered the conductor and Petie stumbled upstairs. He
held out two pennies when the conductor came along. "One
for me and one for the dog," he said. The people who
overheard him, laughed, but the conductor snatched a penny
a penny from his hand and thrust a ticket into the crook
of his thumb. A kindly woman leant over to Petie. "They