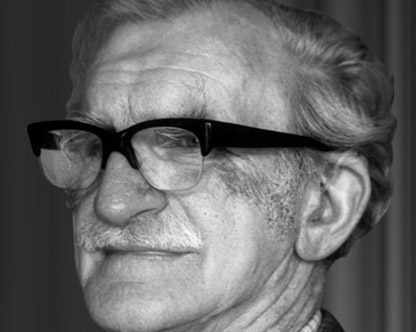 Sam Hanna Bell was born in Glasgow in 1909, but following the death of his father in 1918 the family returned to his mother’s homeplace of Raffrey, Co. Down. Although Bell spent only three years here, the landscape around Strangford Lough would stay with him for life. In 1921 the family moved to Belfast, and Bell’s fiction is pioneering in its attention to the urban. The poverty of his family meant that his formal education ended when he was 14, but, while working in a series of low paid jobs, Bell acquired impressive self-education.

In the poverty, unemployment, and sectarianism of Belfast in the late 1920s and 1930s Bell turned to socialist politics (the subject of his 1961 novel, ‘The Hollow Ball’). His early writing also appeared in the newspaper ‘Labour Progress’ as well as in ‘The Bell’. A collection of this writing appeared as ‘Summer Loanen’ in 1943 and in the same year he helped to found the journal ‘Lagan’ with John Boyd. Bell married in 1946 having been appointed to the BBC in Belfast as a temporary features producer. Louis MacNeice, who had read his script ‘Ill Fares the Land’, was instrumental in this appointment. The position was made permanent in 1948 and Bell stayed with the BBC until his retirement in 1969. Bell’s many programmes about life in Northern Ireland were pioneering, since the BBC had not previously paid much attention to folklore, country customs, or traditional music. Bell’s work, whether for radio or in fiction, coheres around a commitment to history from below, and this attitude meant that he was an oppositional figure within the conservative BBC of his day.

His radio work informs his collections ‘Erin's Orange Lily’ (1956) and ‘Within Our Province’ (1972). He also co-edited ‘The Arts in Ulster’ (1951). His literary reputation rests on four novels which, taken together, provide a loose history of the North from the late 17th century (‘December Bride’) to the 1930s (‘The Hollow Ball’). His masterpiece is his first novel ‘December Bride’ which appeared in 1951, though an excerpt appeared some five years previously in ‘Lagan’. Bell served on the Northern Ireland Arts Council for many years and was awarded an honorary MA by Queen’s University, Belfast, in 1970 and the MBE in 1977. He died in 1990, shortly before Thaddeus O' Sullivan's film version of ‘December Bride’ was released.