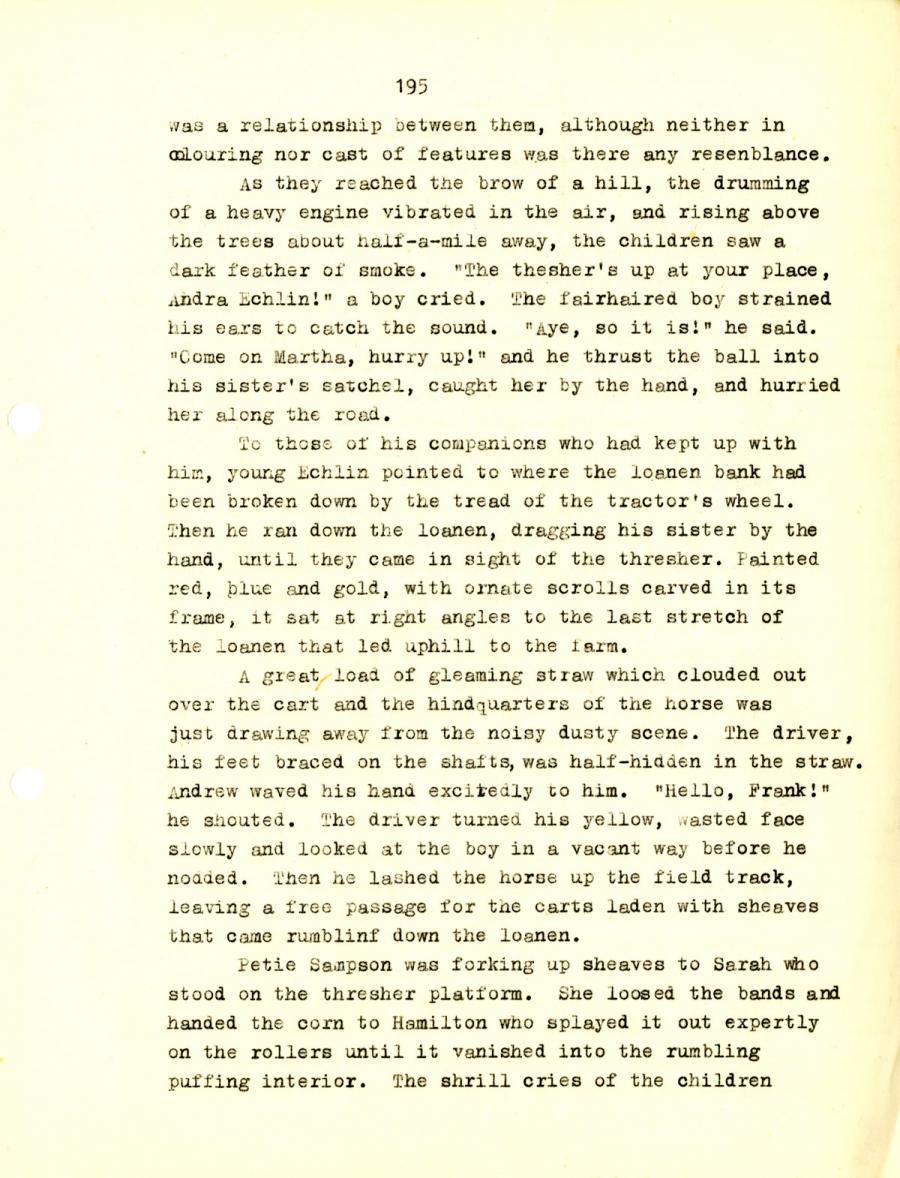 was a relationship between them, although neither in
colouring nor cast of features was there any resenblance.

As they reached the brow of a hill, the drumming
of a heavy engine vibrated in the air, and rising above
the trees about half-a-mile away, the children saw a
dark feather of smoke. "The thesher's up at your place,
Andra Echlinl!" a boy cried. The fairhaired boy strained
his ears to catch the sound. "Aye, so it is!" he said.
"Come on Martha, hurry up!" and he thrust the ball into
his sister's satchel, caught her by the hand, and hurried
her along the road.

To those of his companions who had kept up with
him, young Echlin pointed to where the loanen bank had
been broken down by the tread of the tractor's wheel.
Then he ran down the loanen, dragging his sister by the
hand, until they came in sight of the thresher. Fainted
red, blue and gold, with ornate scrolls carved in its
frame, it sat at right angles to the last stretch of
the loanen that led uphill to the farm.

A great load of gleaming straw which clouded out
over the cart and the hindquarters of the horse was
just drawing away from the noisy dusty scene. The driver,
his feet braced on the shafts, was half-hidden in the straw.
Andrew waved his hand excitedly to him. "Hello, Frank!"
he shouted. The driver turned his yellow, wasted face
slowly and looked at the boy in a vacant way before he
nodded. Then he lashed the horse up the field track,
leaving a free passage for the carts laden with sheaves
that came rumblinf down the loanen.

Petie Sampson was forking up sheaves to Sarah who
stood on the thresher platform. She loosed the bands and
handed the corn to Hamilton who splayed it out expertly
on the rollers until it vanished into the rumbling
puffing interior. The shrill cries of the children