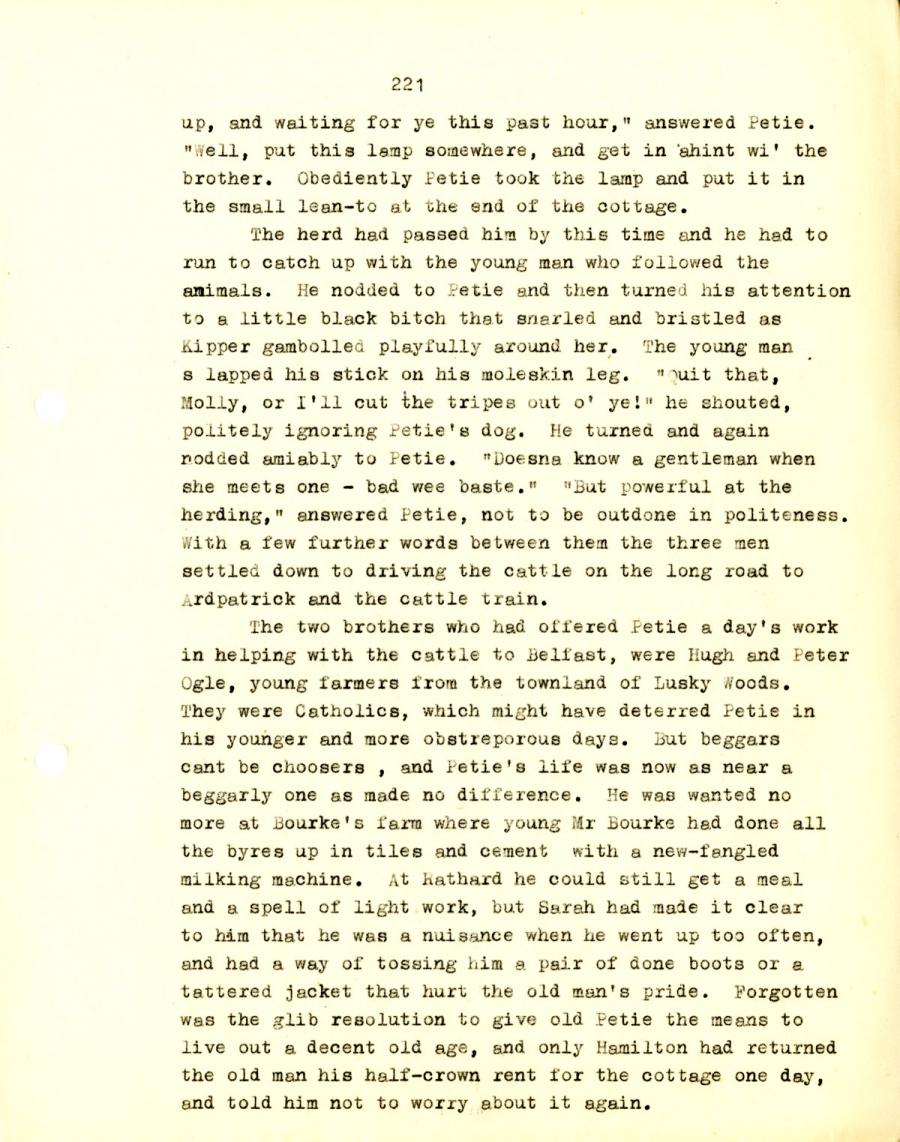 up, and waiting for ye this past hour," answered Petie.
"Well, put this lamp somewhere, and get in shint wi' the
brother. Obediently Petie took the lamp and put it in
the small lean-to at the end of the cottage.

The herd had passed him by this time and he had to
run to catch up with the young man who followed the
animals. He nodded to Petie and then turned his attention
Ko a little black bitch that snarled and bristled as
hipper gambolled playfully around her. The young man
slapped his stick on his moleskin leg. " Quit that,
Molly, or I’ll cut the tripes out o’ ye!" he shouted,
politely ignoring Petie’s dog. He turned and again
nodded amiably to Petie. "Doesna know a gentleman when
she meets one - bad wee baste.” "But powerful at the
herding,” answered Petie, not to be outdone in politeness.
With a few further words between them the three men
settled down to driving the cattle on the long road to
Ardpatrick and the cattle train.

The two brothers who had offered Petie a day’s work
in helping with the cattle to Belfast, were Hugh and Peter
Ogle, young larmers from the towniand of Lusky Woods.
They were Catholics, which might have deterred Petie in
his younger and more obstreperous days. But beggars
cant be choosers , and Petie's life was now as near a
beggarly one as made no difference. He was wanted no
more at Bourke’s farm where young Mr Bourke had done all
the byres up in tiles and cement with a new-fangled
milking machine. At Rathard he could still get a meal
and a spell of light work, but Sarah had made it clear
to him that he was a nuisance when he went up too often,
and had a way of tossing him a pair of done boots or a
tattered jacket that hurt the old man’s pride. Forgotten
was the glib resolution to give old Petie the means to
live out a decent old age, and only Hamilton had returned
the old man his half-crown rent for the cottage one day,
and told him not to worry about it again.