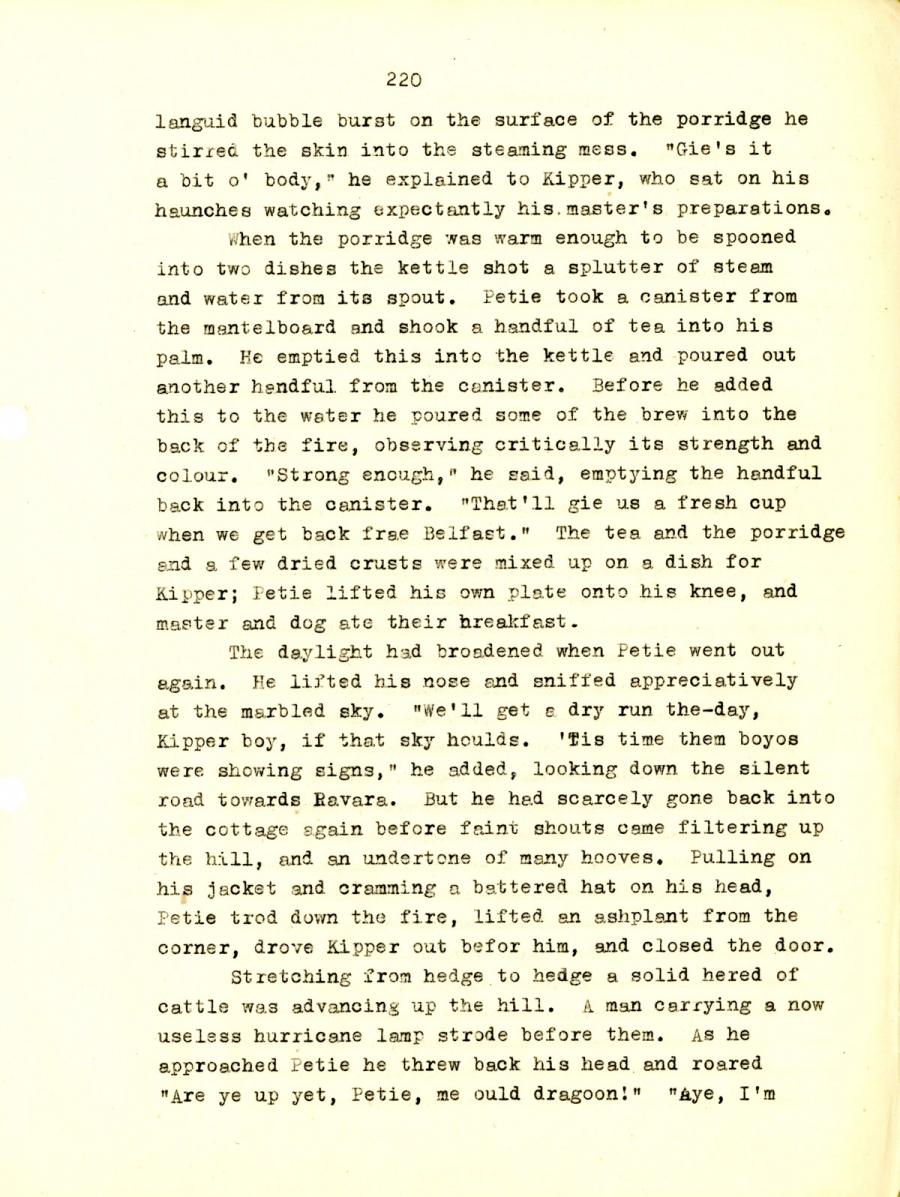 languid bubble burst on the surface of the porridge he
stirred the skin into the steaming mess. "Gie's it
a bit o' body," he explained to Kipper, who sat on his
haunches watching expectantly his master's preparations.

When the porridge was warm enough to be spooned
into two dishes the kettle shot a splutter of steam
and water from its spout. Petie took a canister from
the mantelboard and shook a handful of tea into his
palm. He emptied this into the kettle and poured out
another handful from the canister. 3efore he added
this to the water he poured some of the brew into the
back of the fire, observing critically its strength and
colour. "Strong enough," he said, emptying the handful
back into the canister. "That'll gie us a fresh cup
when we get back frae Belfast." The tea and the porridge
and a few dried crusts were mixed up on a dish for
Kipper; Petie lifted his own plate onto his knee, and
master and dog ate their hreakfast.

The daylight had broadened when Petie went out
again. He lifted his nose and sniffed appreciatively
at the marbled sky. "We'll get a dry run the-day,
Kipper boy, if that sky houlds. "Tis time them boyos
were showing signs," he added, looking down the silent
road towards Ravara. But he had scarcely gone back into
the cottage again before faint shouts came filtering up
the hill, and an undertone of many hooves. Pulling on
his jacket and cramming a battered hat on his head,
Petie trod down the fire, lifted an ashplant from the
corner, drove Kipper out befor him, and closed the door.

Stretching from hedge to hedge a solid hered of
cattle was advancing up the hill. A man carrying a now
useless hurricane lamp strode before them. As he
approached Petie he threw back his head and roared
"Are ye up yet, Petie, me ould dragoon!" "Aye, I'm