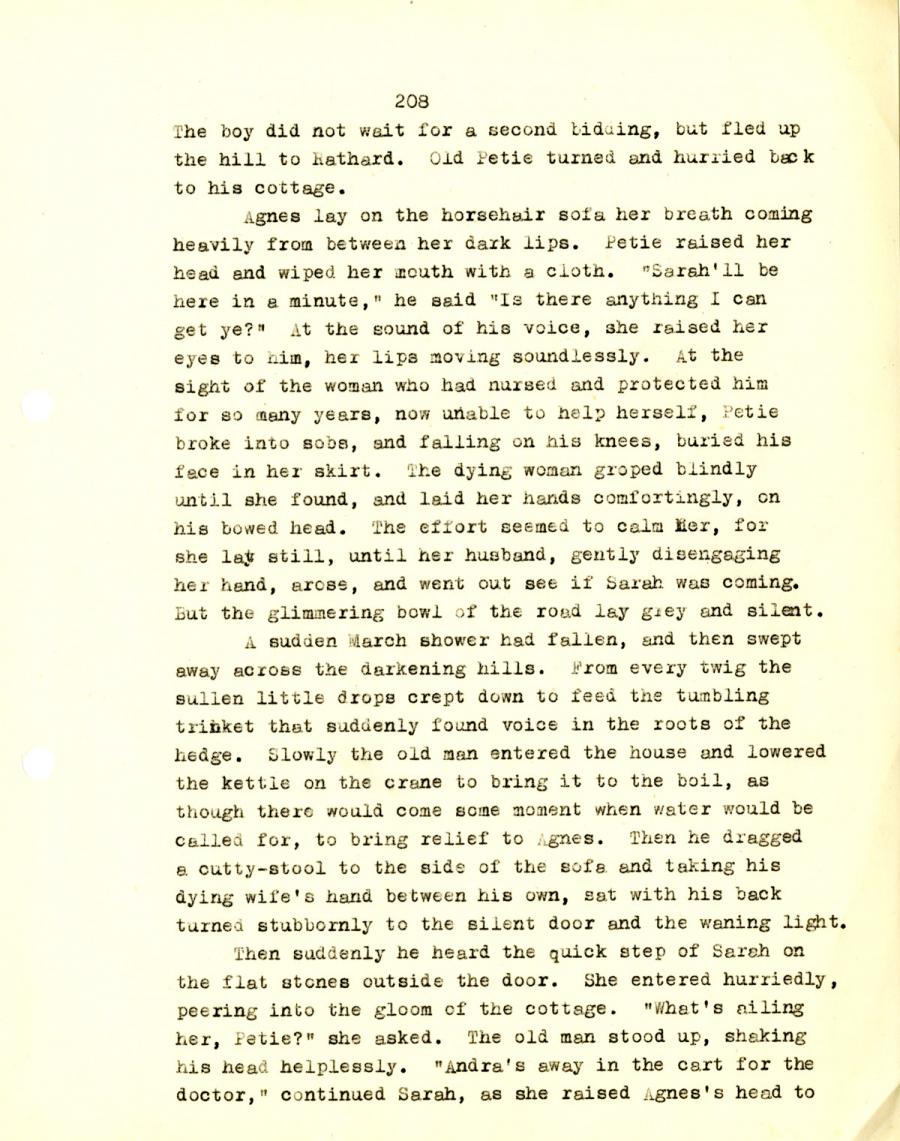 Ihe boy did not wait lor a second bidding, but fled up
the hil to Hathard. Old Petie turned and hurried back
to his cottage.

Agnes lay on the horsehair sola her breath coming
heavily from between her dark lips, Petie raised her
head and wiped her mouth with a cloth. "Sarah'11 be
here in a minute," he said "Is there anything I can
get ye?" At the sound of his voice, she raised her
eyes to aim, her lips moving soundlessly. At the
sight of the woman who had nursed and protected him
for so many years, now unable to help herself, Petie
broke into sobs, and falling on his knees, buried his
face in her skirt. The dying woman groped blindly
until she found, and laid her hands comfortingly, on
his bowed head. The effort seemed to calm her, for
she lat still, until her husband, gently disengaging
her hand, arose, and went out see if Sarah, was coming.

But the glimmering bowl of the road lay grey and silent.
A sudden March shower had fallen, and then swept
away across the darkening hills. From every twig the
sullen little drops crept down to feed the tumbling
trinket that suddenly found voice in the roots of the
hedge. Slowly the old man entered the house and lowered
the kettle on the crane to bring it to the boil, as
though there would come seme moment when water would be
called for, to bring relief to Agnes. Then he dragged
a cutty-stool to the side of the sofa and taking his
dying wife's hand between his own, sat with his back
turned stubbornly to the siient door and the waning light.

Then suddenly he heard the quick step of Sarah on
the flat stones outside the door. She entered hurriedly,
peering into the gloom of the cottage. "What's ailing
her, Petie?" she asked. The old man stood up, shaking
his head helplessly. "Andra's away in the cart for the
doctor," continued Sarah, as she raised Agnes's head to