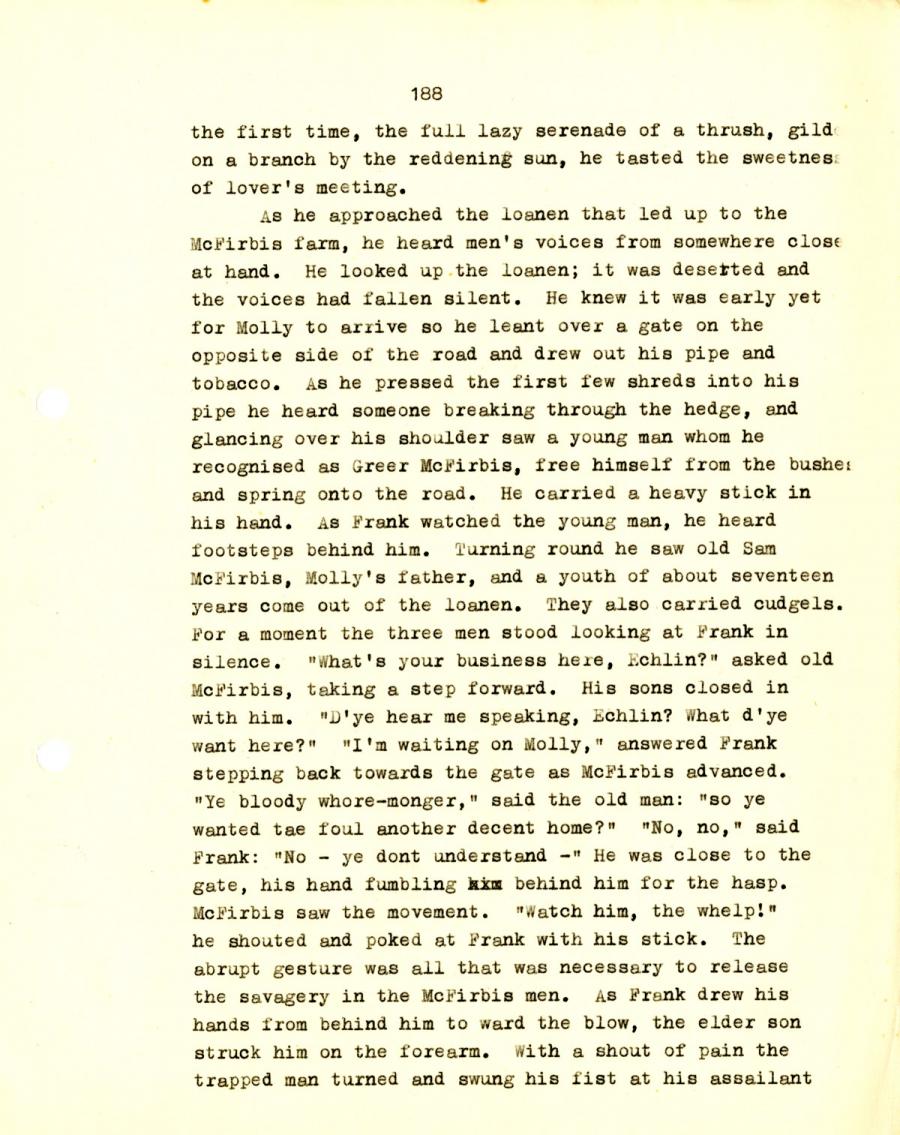 the first time, the full lazy serenade of a thrash, gild
on a branch by the reddening son, he tasted the sweetnes.
of lover's meeting.

As he approached the loanen that led up to the
McFirbis farm, he heard men's voices from somewhere close
at hand. He looked up the loanen; it was deserted and
the voices had fallen silent. He knew it was early yet
for Molly to ariive so he leant over a gate on the
opposite side of the road and drew out his pipe and
tobacco, as he pressed the first few shreds into his
pipe he heard someone breaking through the hedge, and
glancing over his shoulder saw a young man whom he
recognised as Greer McFirbis, free himself from the bushes
and spring onto the road. He carried a heavy stick in
his hand, as Frank watched the young man, he heard
footsteps behind him. Turning round he saw old Sam
McFirbis, Molly's father, and a youth of about seventeen
years come out of the loanen. They also carried cudgels,
for a moment the three men stood looking at Frank in
silence. "What's your business here, Echlin?" asked old
McFirbis, taking a step forward. His sons closed in
with him. "D'ye hear me speaking, Echlin? What d'ye
want here?" "I'm waiting on Molly," answered Frank
stepping back towards the gate as McFirbis advanced.

"Ye bloody whore-monger," said the old man: "so ye
wanted tae foul another decent home?" "No, no," said
Frank: "No - ye dont understand -" He was close to the
gate, his hand fumbling behind him for the hasp.
McFirbis saw the movement. "Watch him, the whelp!"
he shouted and poked at Frank with his stick. The
abrupt gesture was all that was necessary to release
the savagery in the McFirbis men. As Frank drew his
hands from behind him to ward the blow, the elder son
struck him on the forearm. With a shout of pain the
trapped man turned and swung his fist at his assailant