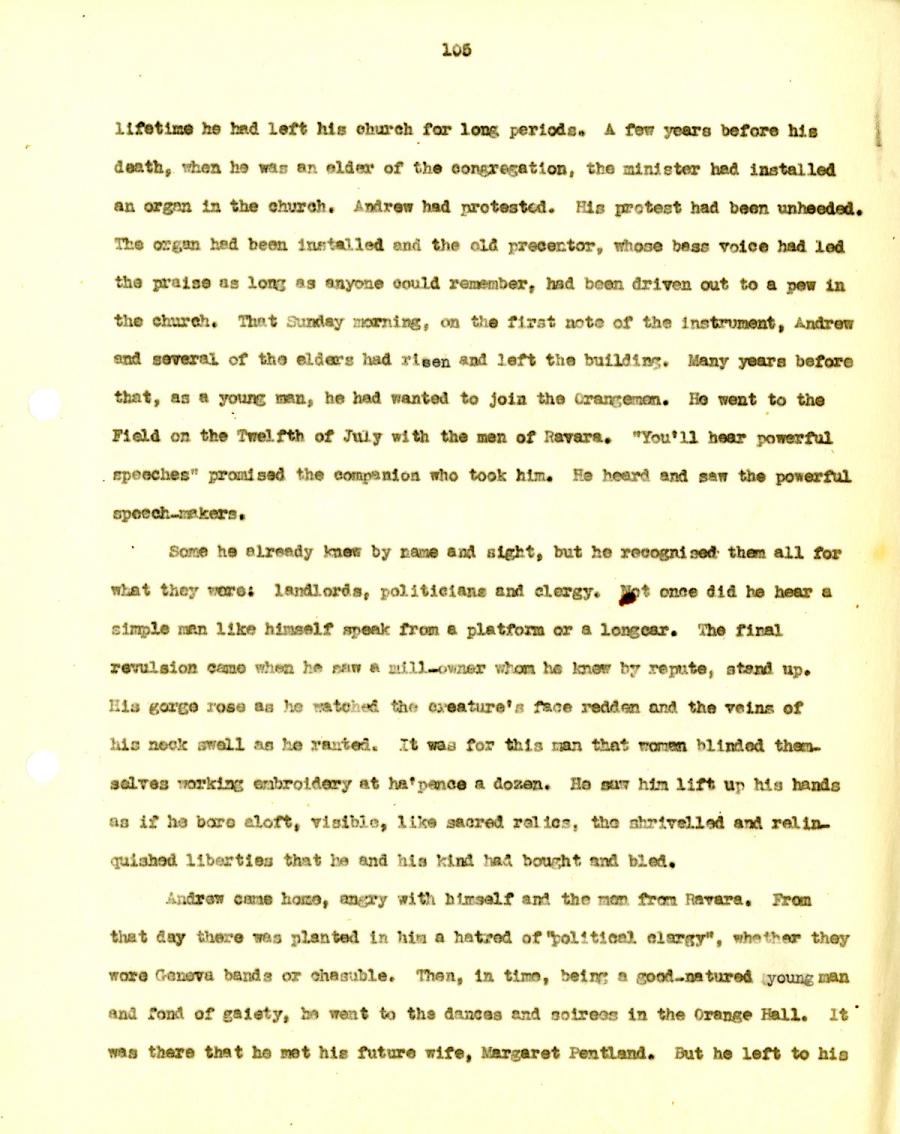 lifetime he had left hie church for lone?, periods* A few years before his
death, when he wan an older of the congregation, the minister had installed
an organ in the church. Andrew had protested. His pretest had been unheeded.
The or£,an had been installed and the old precentor, whose boss voice had led
the praise as Ion? a3 anyone oould remember, had been driven out to a pew in
the church. Hint Sunday '.’warring, on the first note of the instrument, Andrew
end several of the elders had risen *nd left the build!nr. Many years before
that, as a young man, he had wanted to join the Orangeman. Ho went to the
Field on the Twelfth of July with the men of Ravara. "You* 11 hear powerful
speeches" promised the companion who took him. Re heard and sew the powerful
npoceh-rrkers•

Some he already knew by MM and Bight, but he recognised them all for
what they worst landlords, politicians and clergy, jjpt once did he hear a
simple man like himself speak from a platform or a long car. The final
revulsion camo when he niw a mill-owner whoa he knew by repute, stand up.

Ilia gorge lose as he rate' -«d the creature*n face redden and the veins of
his neck swell .nn lie ranted. It wati for this ran that roman blinded than-
selves ’forking embroidery at ha'pence a dozen. He wn him lift up his hands
as if he boro aloft, visible, like sacred relics, the shrivelled and relin-
quished liberties that be and hie kind had bought and bled,

Andrew came homo, on,-ry with himself and thr man from Ravara, Fran
that day there was planted in him a hatred of Tpoliticel ciargy", whether they
wore Geneva bands or Chasuble. Then, In tiro, being a good-natured young nan
and fond of gaiety, ha went to ths dances and soirees in the Orange Hall. It *
was there that he met hie future wife, Margaret Pentland. But he left to his