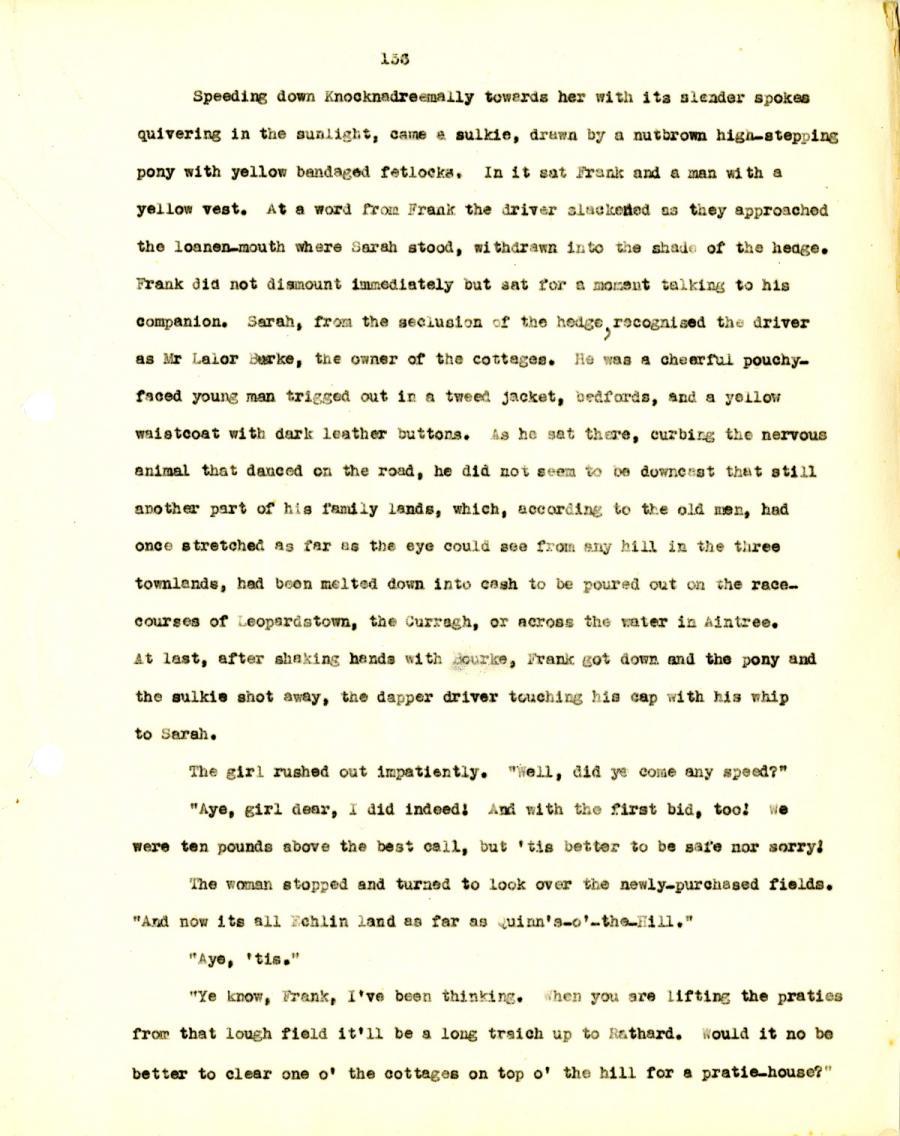 Speeding down Knocknadreemally towards her with its slender spokes
quivering in the sunlight, came a sulkie, drawn by a nutbrown high-stepping
pony with yellow bandaged fetlocks. In it sat Frank and a man with a
yellow vest. At a word from Frank the driver slackened as they approached
the loanen-mouth where Sarah stood, withdrawn into the shade of the hedge.
FTank did not dismount immediately but sat for a moment talking to his
companion. Sarah, from the seclusion of the hedge recognised the driver
as Mr Lalor Barke, the owner of the cottages. He was a cheerful pouchy-
faced young man trigged out. in a tweed jacket, bedfords, and a yellow
waistcoat with dark leather buttons. As he sat there, curbing the nervous
animal that danced on the road, he did not seem to be downcast that still
another part of his family lands, which, according to the old men, had
once stretched as far as the eye could see from any hill in the three
townlands, had been melted down into cash to be poured out on the race-
courses of Leopardstown, the Curragh, or across the water in Aintree.
At last, after shaking hands with Bourke, Frank got down and the pony and
the sulkie shot away, the dapper driver touching his cap with his whip
to Sarah.

The girl rushed out impatiently. "Well, did ye come any speed?”
"Aye, girl dear, 1 did indeed! And with the first bid, too! we
were ten pounds above the best call, but ’ t'is better to be safe nor sorry!

The woman stopped and turned to look over the newly-purchased fields.
"And now its all Efchlin land as far as Quinn's-o’-tha-Hill."

"Ye know, Frank, I’ve been thinking. When you are lifting the praties
from that lough field it'll be a loug traich up to Rathard. Would it no be
better to clear one o’ the cottages on top o’ the hill for a pratie-house?"