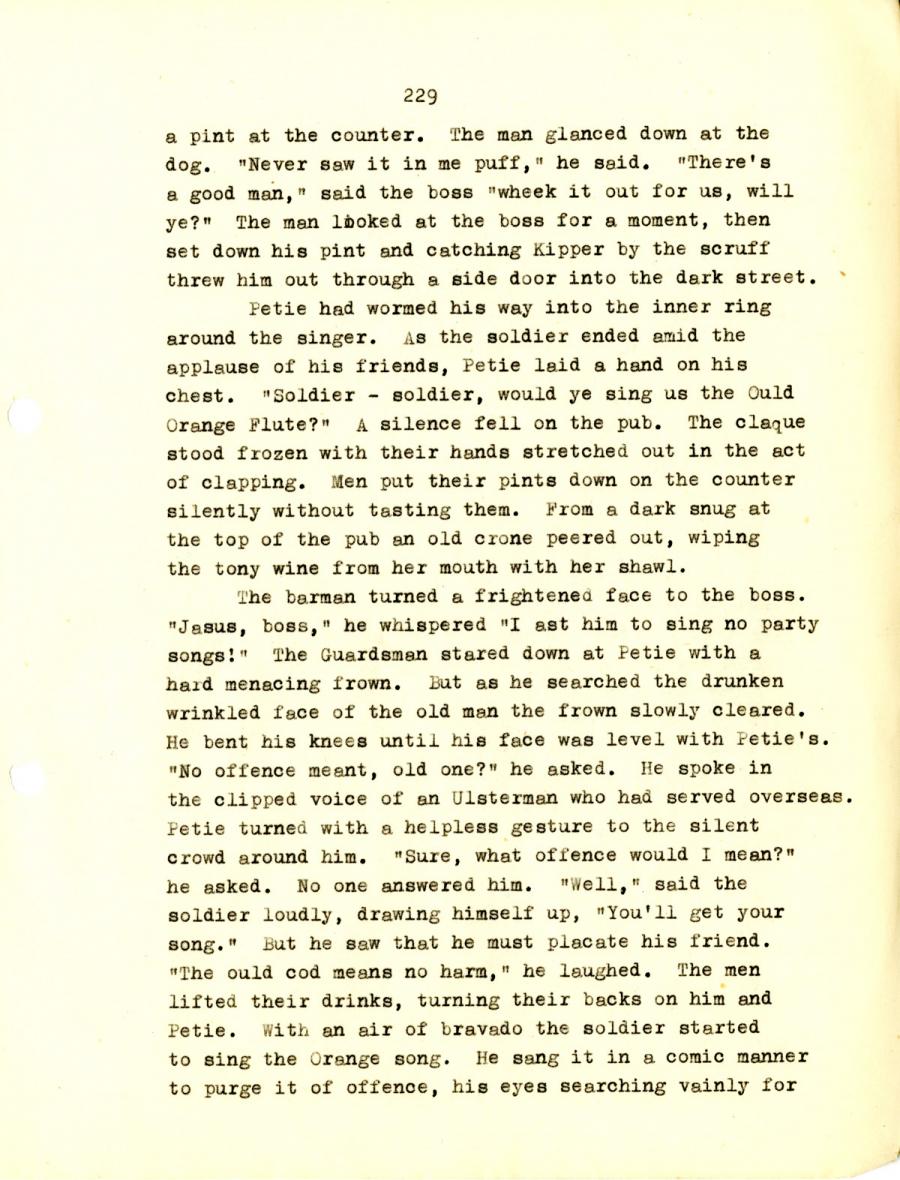 a pint at the counter. The man glanced down at the
dog. "Never saw it in me puff," he said. "There's
a good man," said the boss "wheek it out for us, will
ye?" The man looked at the boss for a moment, then
set down his pint and catching Kipper by the scruff
threw him out through a side door into the dark street.

Petie had wormed his way into the inner ring
around the singer. As the soldier ended amid the
applause of his friends, Petie laid a hand on his
chest. "Soldier - soldier, would ye sing us the Ould
Orange Flute?" A silence fell on the pub. The claque
stood frozen with their hands stretched out in the act
of clapping. Men put their pints down on the counter
silently without tasting them. From a dark snug at
the top of the pub an old crone peered out, wiping
the tony wine from her mouth with her shawl.

The barman turned a frightened face to the boss.
"Jesus, boss," he whispered "I ast him to sing no party
songs!" The Guardsman stared down at Petie with a
hard menacing frown. But as he searched the drunken
wrinkled face of the old man the frown slowly cleared.
He bent his knees until his face was level with Petie's.
"No offence meant, old one?" he asked. He spoke in
the clipped voice of an Ulsterman who had served overseas.
Petie turned with a helpless gesture to the silent
crowd around him. "Sure, what offence would I mean?"
he asked. No one answered him. "Well," said the
soldier loudly, drawing himself up, "You'll get your
song." But he saw that he must placate his friend.

"The ould cod means no harm," he laughed. The men
lifted their drinks, turning their backs on him and
Petie. With an air of bravado the soldier started
to sing the Orange song. He sang it in a comic manner
to purge it of offence, his eyes searching vainly for