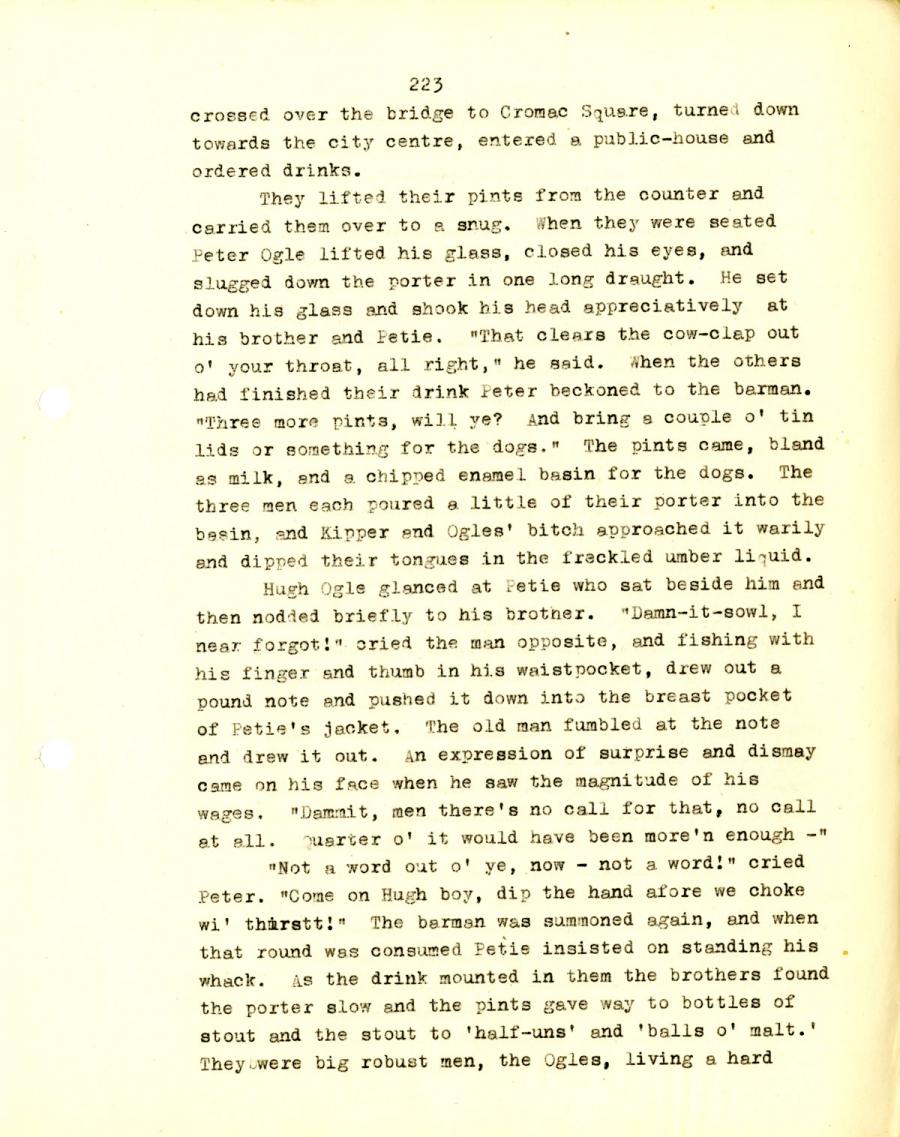 crossed over the bridge to Cromac Square, turned down
towards the city centre, entered a public-house and
ordered drinks.

They lifted, their pints from the counter and
carried them over to a snug. When they were seated
Peter Ogle lifted his glass, closed his eyes, and
slugged down the porter in one long draught. He set
down his glass and shook his head appreciatively at
his brother and Petie. "That clears the cow-clap out
o' your throat, all right," he said .When the others
had finished their drink Peter beckoned to the barman.
"Three more pints, will ye? And bring a couple o’ tin
lids or something for the dogs." The pints came, bland
as milk, and a chipped enamel basin for the dogs. The
three men each poured a little of their porter into the
basin, and Kipper and Ogles’ bitch approached it warily
and dipped their tongues in the frackled umber liquid.

Hugh Ogle glanced at Petie who sat beside him and
then nodded briefly to his brotner. "Damn-it-sowl, I
near forgot!" cried the man opposite, and fishing with
his finger and thumb in his waist pocket, drew out a
pound note and pushed it down into the breast pocket
of Petie's jacket. The old man fumbled at the note
and drew it out. An expression of surprise and dismay
came on his face when he saw the magnitude of his
wages. "Dammit, men there's no call for that, no call
at all. Quarter o' it would have been more’n enough

"Not a word out o' ye, now - not a word!" cried
Peter. "Come on Hugh boy, dip the hand afore we choke
wi' thirstt!" The barman was summoned again, and when
that round was consumed Petie insisted on standing his
whack. As the drink mounted in them the brothers found
the porter slow and the pints gave way to bottles of
stout and the stout to ’half-uns’ and ’balls o’ malt.'
They were big robust men, the Ogles, living a hard