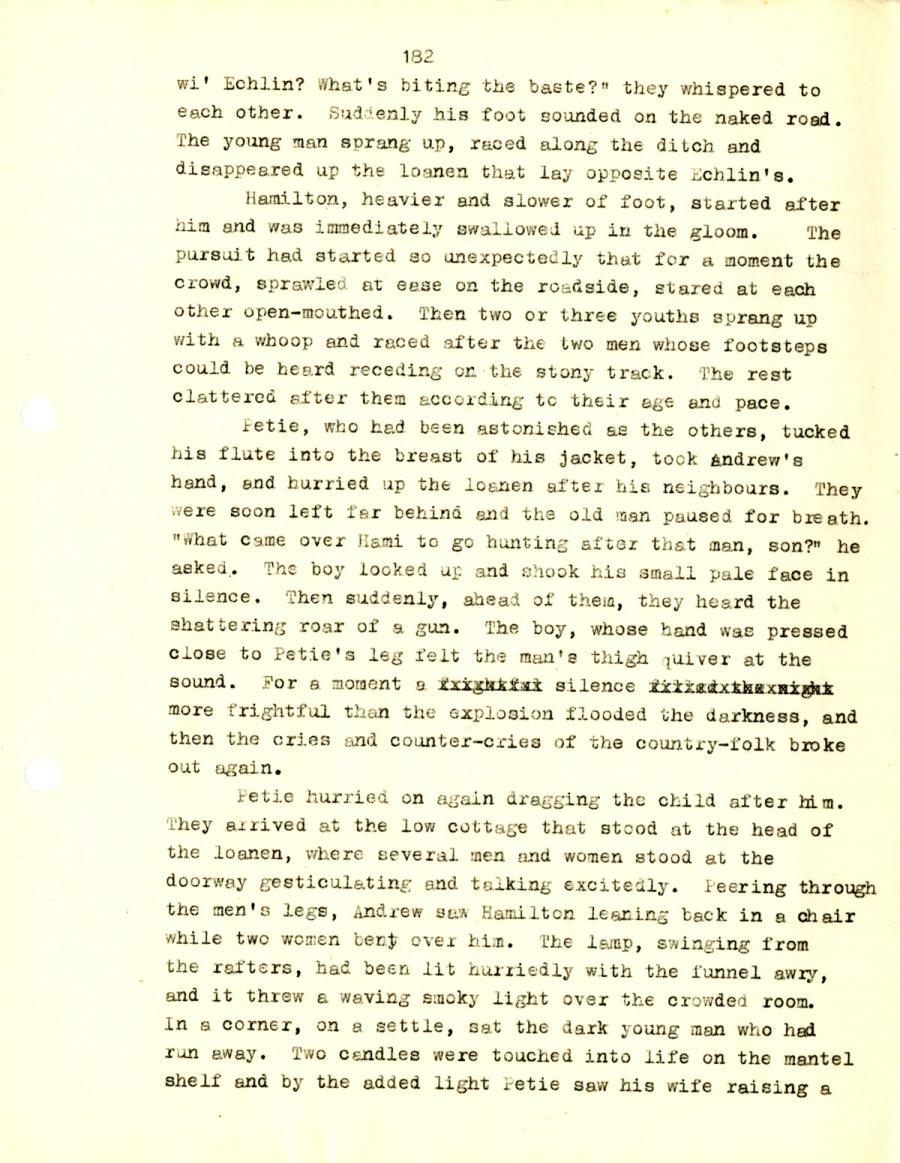 wi' Echlin? What' s biting the baste?" they whispered to
each other. Suddenly his foot sounded on the naked road.
The young mnan sprang up, raced along the ditch and
disappeared up the loanen that lay opposite Echlin's.

Hamilton, heavier and slower of foot, started after
him and was immediately swallowed up in the gloom. The
pursuit had started so unexpectedly that for a moment the
crowd, sprawled at ease on the roadside, stared at each
other open-mouthed. Then two or three youths sprang up
with a whoop and raced after the two men whose footsteps
could be heard receding on the stony track. The rest
clattered after them according to their age and pace.

Petie, who had been astonished as the others, tucked
his flute into the breast of his jacket, took Andrew's
hand, and hurried up the loanen after his neighbours. They
were soon left far behind and the old man paused for breath.
"*What came over Hami to go hunting after that man, son?" he
asked. The boy looked up and shook his small pale face in
silence. Then suddenly, ahead of them, they heard the
shattering roar of a gun. The boy, whose hand was pressed
close to Petie’s leg felt the man’s thigh quiver at the
sound. For a moment o silence
more frightful than the explosion flooded the darkness, and
then the cries and counter-cries of the country-folk broke
out again.

Petie hurried on again dragging the child after him.
They airived at the low cottage that stood at the head of
the loanen, where several men and women stood at the
doorway gesticulating and talking excitedly. Peering through
the men's legs, Andrew saw Hamilton leaning back in a chair
while two women bent over him. The lamp, swinging from
the rafters, had been lit hurriedly with the funnel awry,
and it threw a waving smoky light over the crowded room,
in a corner, on a settle, sat the dark young man who had
run away. Two candles were touched into life on the mantel
shelf and by the added light Petie saw his wife raising a