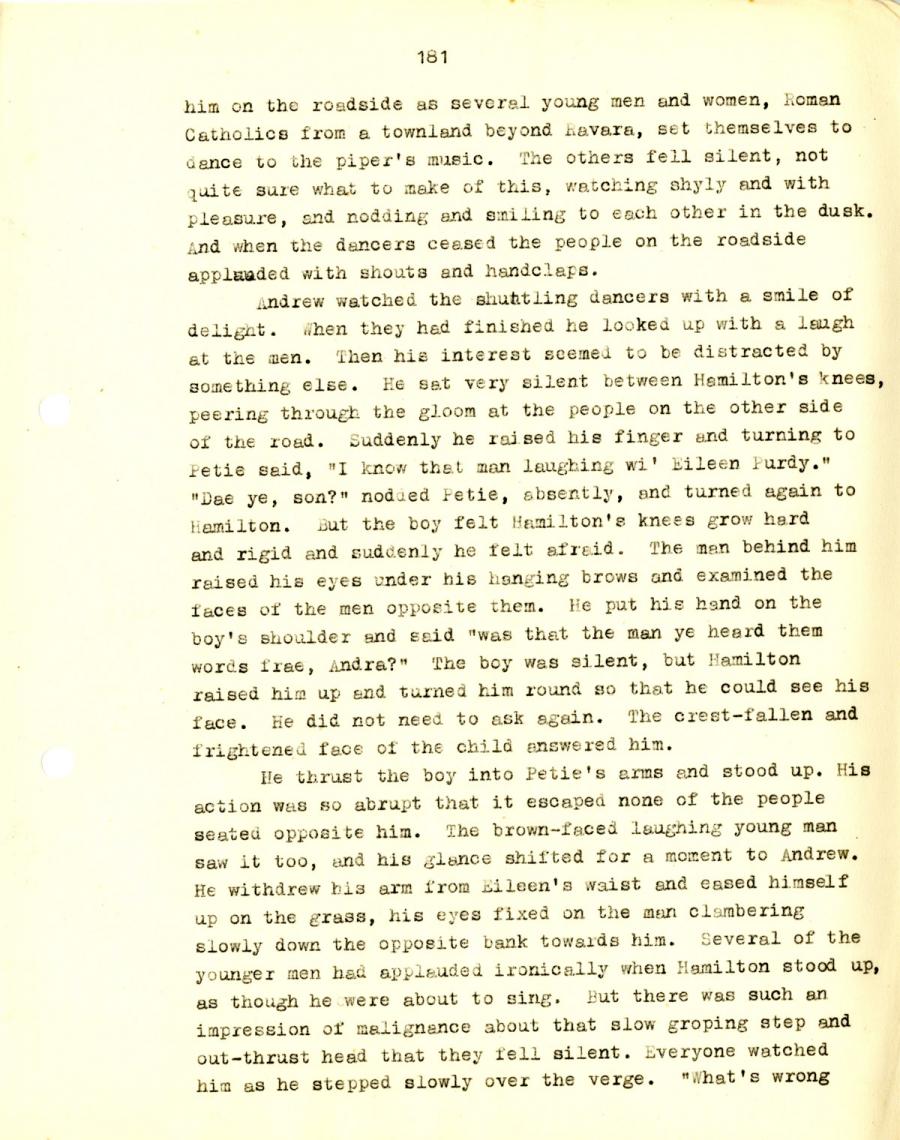 him on the roadside as several young men and women, Roman
Catholics from a townland beyond Ravara, set themselves to
dance to the piper's music. The others fell silent, not
quite sure what to make of this, watching shyly and with
pleasure, and nodding and smiling to each other in the dusk.
And when the dancers ceased the people on the roadside
applauded with shouts and handclaps.

Andrew watched the shuttling dancers with a smile of
delight. When they had finished he looked up with a laugh
at the men. Then his interest seemed to be distracted by
something else. He sat very silent between Hamilton's knees,
peering through the gloom at the people on the other side
of the road, suddenly he raised his finger and turning to
Petie said, "I know that man laughing wi' Eileen Purdy."
"Dae ye, son?" nodoed Petie, absently, and turned again to
Hamilton, hut the boy felt Hamilton's knees grow hard
and rigid and suddenly he felt afraid. The man behind him
raised his eyes under his hanging brows and examined the
faces of the men opposite them. He put his hand on the
boy's shoulder and said "was that the man ye heard them
words frae, Andra?" The boy was silent, but Hamilton
raised him up end turned him round so that he could see his
face. He did not need to ask again. The crest-fallen and
frightened face ol the child answered him.

He thrust the boy into Petie’s arms and stood up. His
action was so abrupt that it escaped none of the people
seated opposite him. The brown-faced laugning young man
saw it too, and his glance shifted for a moment to Andrew.
He withdrew his arm from Aileen's waist and eased himself
up on the grass, his eyes fixed on the man clambering
slowly down the opposite bank towards him. Several of the
younger men had applauded ironically when Hamilton stood up,
as though he were about to sing. But there was such an
impression of malignance about that slow groping step and
out-thrust head that they fell silent. Everyone watched
him as he stepped slowly over the verge. "What's wrong