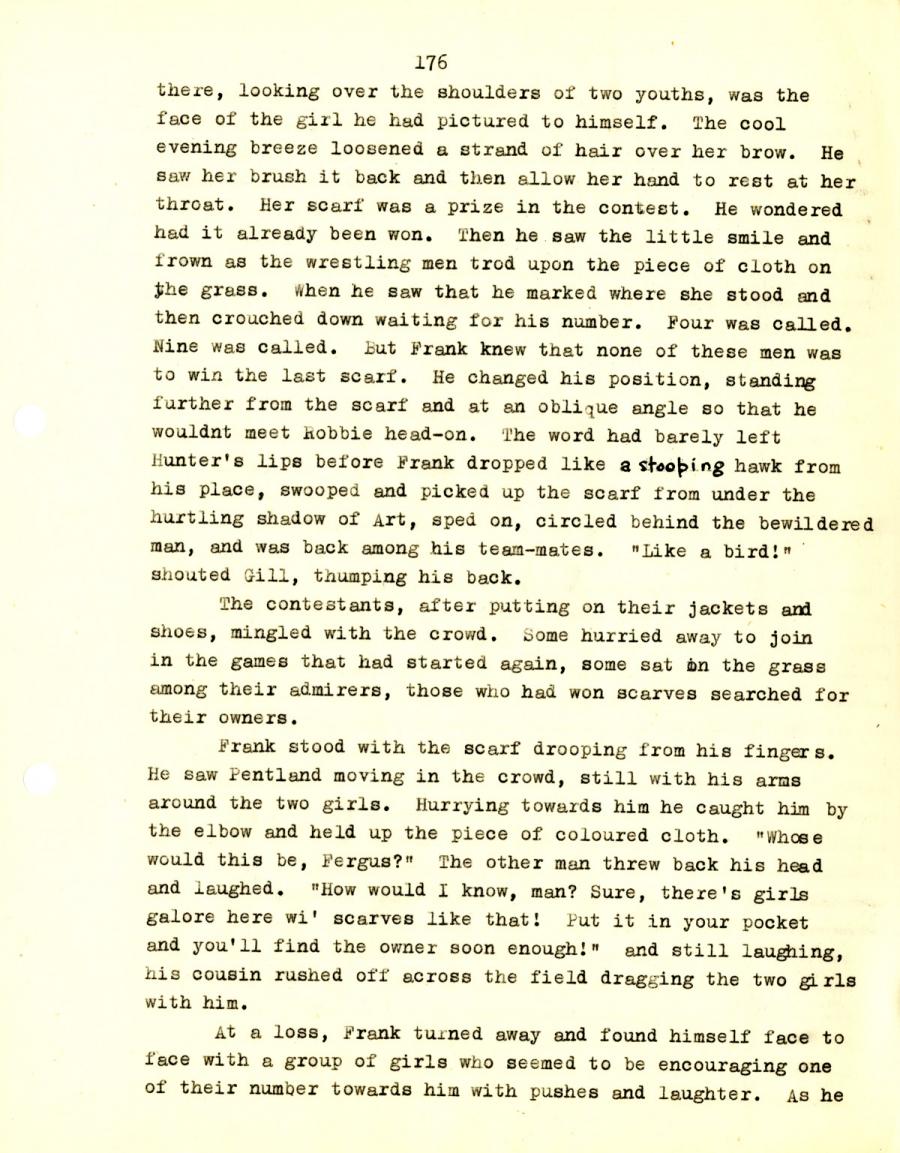 there, looking over the shoulders of two youths, was the
face of the girl he had pictured to himself. The cool
evening breeze loosened a strand of hair over her brow. He
saw her brush it back and then allow her hand to rest at her
throat. Her scarf was a prize in the contest. He wondered
had it already been won. Then he saw the little smile and
frown as the wrestling men trod upon the piece of cloth on
the grass. Then he saw that he marked where she stood and
then crouched down waiting for his number. Four was called.
Nine was called, but Frank knew that none of these men was
to win the last scarf. He changed his position, standing
further from the scarf and at an oblique angle so that he
wouldnt meet Robbie head-on. The word had barely left
Hunter’s lips before Frank dropped like a stopping hawk from
his place, swooped and picked up the scarf from under the
hurtling shadow of Art, sped on, circled behind the bewildered
man, and was back among his team-mates. "Like a bird!"
shouted Gill, thumping his back.

The contestants, after putting on their jackets and
shoes, mingled with the crowd. Some hurried away to join
in the games that had started again, some sat on the grass
among their admirers, those who had won scarves searched for
their owners.

Frank stood with the scarf drooping from his fingers.
He saw Pentland moving in the crowd, still with his arms
around the two girls. Hurrying towards him he caught him by
the elbow and held up the piece of coloured cloth. "Whose
would this be, Fergus?" The other man threw back his head
and laughed. "How would I know, man? Sure, there's girls
galore here wi' scarves like that! Put it in your pocket
and you’ll find the owner soon enough!" and still laughing,
his cousin rushed off across the field dragging the two girls
with him.

At a loss, Frank turned away and found himself face to
face with a group of girls who seemed to be encouraging one
of their number towards him with pushes and laughter. As he