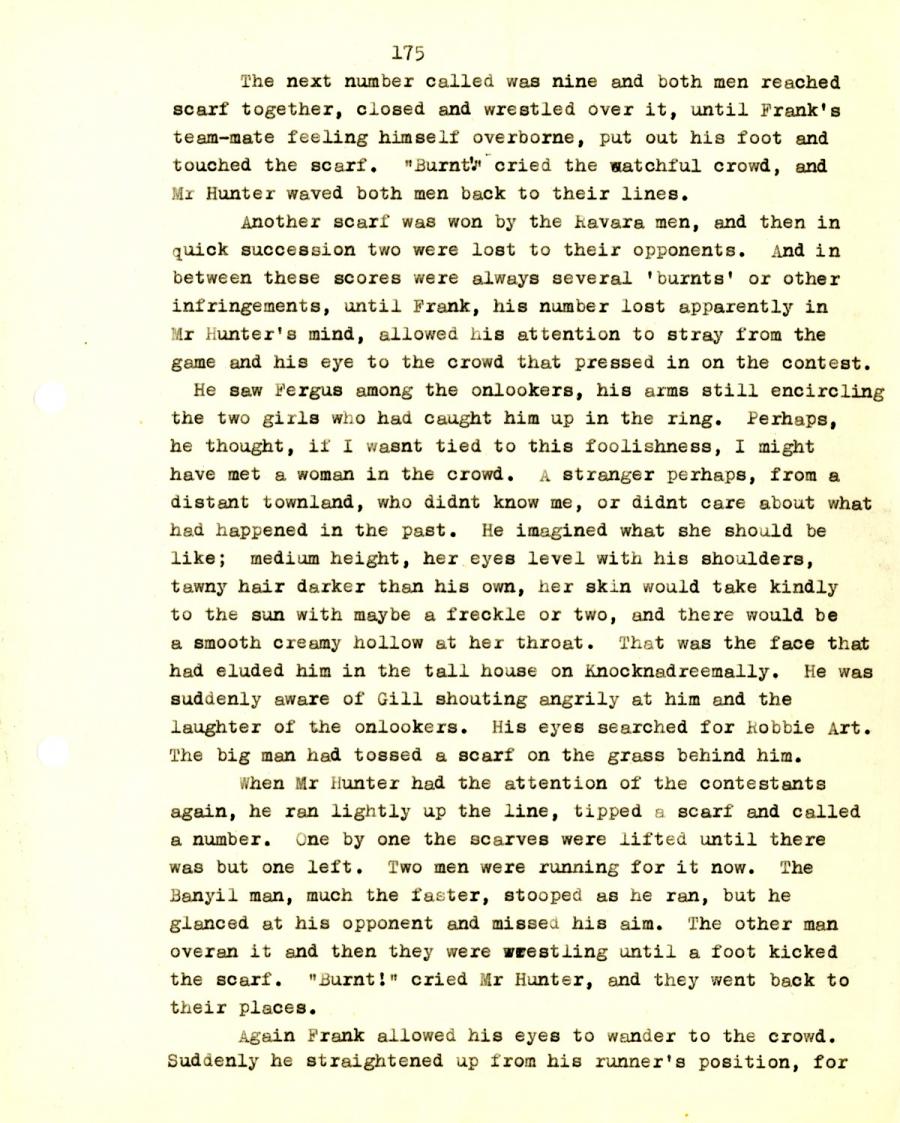 The next number called was nine and both men reached
scarf together, closed and wrestled over it, until Frank’s
team-mate feeling himself overborne, put out his foot and
touched the scarf. "Burnt';' cried the watchful crowd, and
Mr Hunter waved both men back to their lines.

Another scarf was won by the Havara men, and then in
quick succession two were lost to their opponents. And in
between these scores were always several ’burnts’ or other
infringements, until Frank, his number lost apparently in
Mr hunter’s mind, allowed his attention to stray from the
game and his eye to the crowd that pressed in on the contest.

He saw Fergus among the onlookers, his arms still encircling
the two girls who had caught him up in the ring. Perhaps,
he thought, if I wasnt tied to this foolishness, I might
have met a woman in the crowd, a stranger perhaps, from a
distant townland, who didnt know me, or didnt care about what
had happened in the past. He imagined what she should be
like; medium height, her eyes level with his shoulders,
tawny hair darker than his own, her skin would take kindly
to the sun with maybe a freckle or two, and there would be
a smooth creamy hollow at her throat. That was the face that
had eluded him in the tall house on Knocknadreemally. He was
suddenly aware of Gill shouting angrily at him and the
laughter of the onlookers. His eyes searched for Bobbie Art.
The big man had tossed a scarf on the grass behind him.

When Mr Hunter had the attention of the contestants
again, he ran lightly up the line, tipped a scarf and called
a number, one by one the scarves were lifted until there
was but one left. Two men were running for it now. The
Banyil man, much the faster, stooped as he ran, but he
glanced at his opponent and missed his aim. The other man
overan it and then they were wrestling until a foot kicked
the scarf. "Burnt!” cried Mr Hunter, and they went back to
their places.

Again Frank allowed his eyes to wander to the crowd.
Suddenly he straightened up from his runner’s position, for