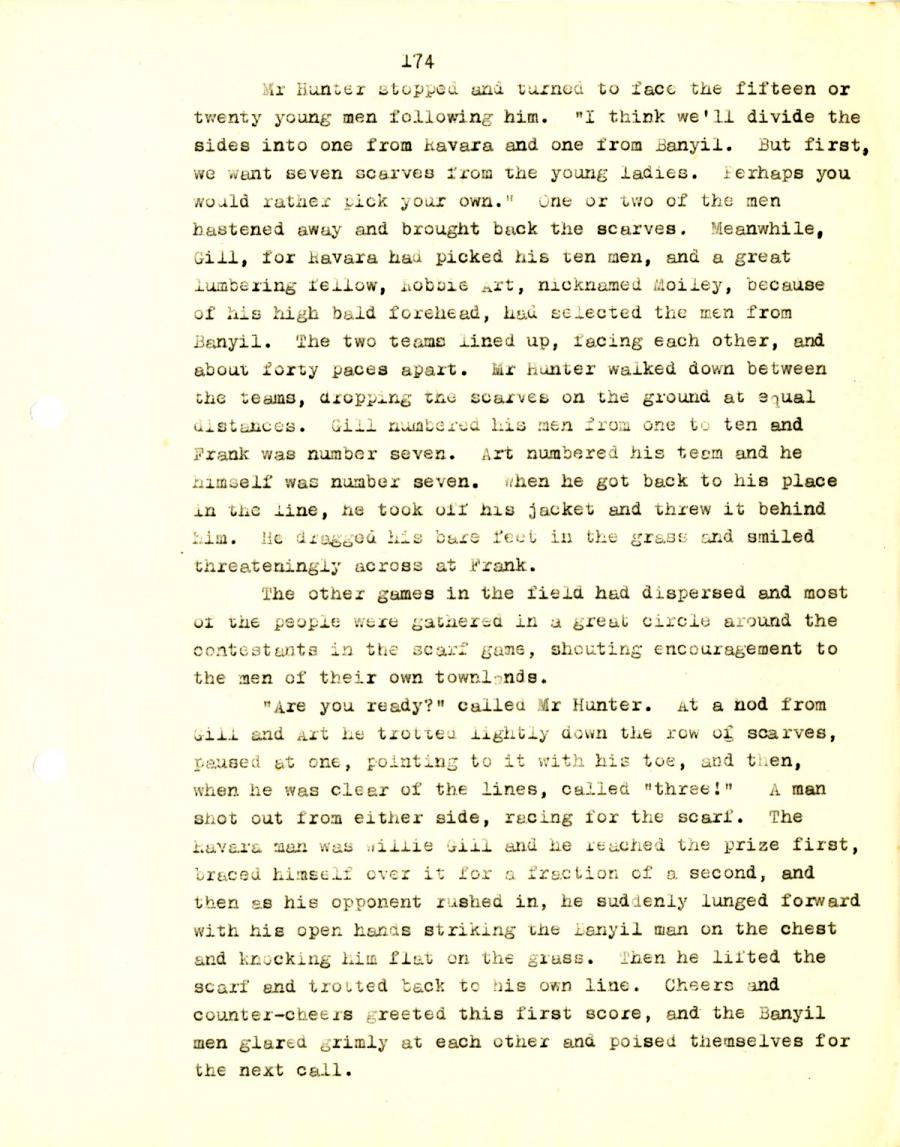 Mr hunter stopped and turned to face the fifteen or
twenty young men following him. "I think we'll divide the
sides into one from Ravara and one from Banyil. But first,
we want seven scarves from the young ladies, perhaps you
would rather pick your own." One or two of the men
hastened away and brought back the scarves. Meanwhile,
Gill, for Ravara had picked his ten men, and a great
lumbering fellow, Robbie Art, nicknamed Moiley, because
of his high bald forehead, had selected the men from
Banyil. The two teams lined up, facing each other, and
about forty paces apart, Mr hunter walked down between
the teams, dropping tno scarves on the ground, at eqUal
dinstances. Gill numbered his men from one to ten and
Frank was number seven. Art numbered his team and he
himself was number seven. When he got back to his place
in the line, he took off his jacket and threw it behind
him. He dragged his bare feer in the grass and smiled
threateningly across at Frank.

The other games in the field had dispersed and most
of the people were gathered in a great circle around the
contestants in the scarf game, shouting encouragement to
the men of their own townlands.

"Are you ready?" calldu Mr Hunter. At a nod from
Gill and Art he trotted lightly down the row o£ scarves,
paused at one, pointing to it with his toe, and then,
when he was clear of the lines, called "three!" A man
shot out from either side, racing for the scarf. The
Ravara man was Willie Gill and he reached the prize first,
braced himself over it for a fraction of a second, and
then as his opponent rushed in, he suddenly lunged forward
with his open hands striking the Banyil man on the chest
and knocking him flat on the grass. Then he lilfed the
scarf end trotted back to his own line. Cheers and
counter-cheers greeted this first score, and the Banyil
men glared grimly at each other and poised themselves for
the next call.