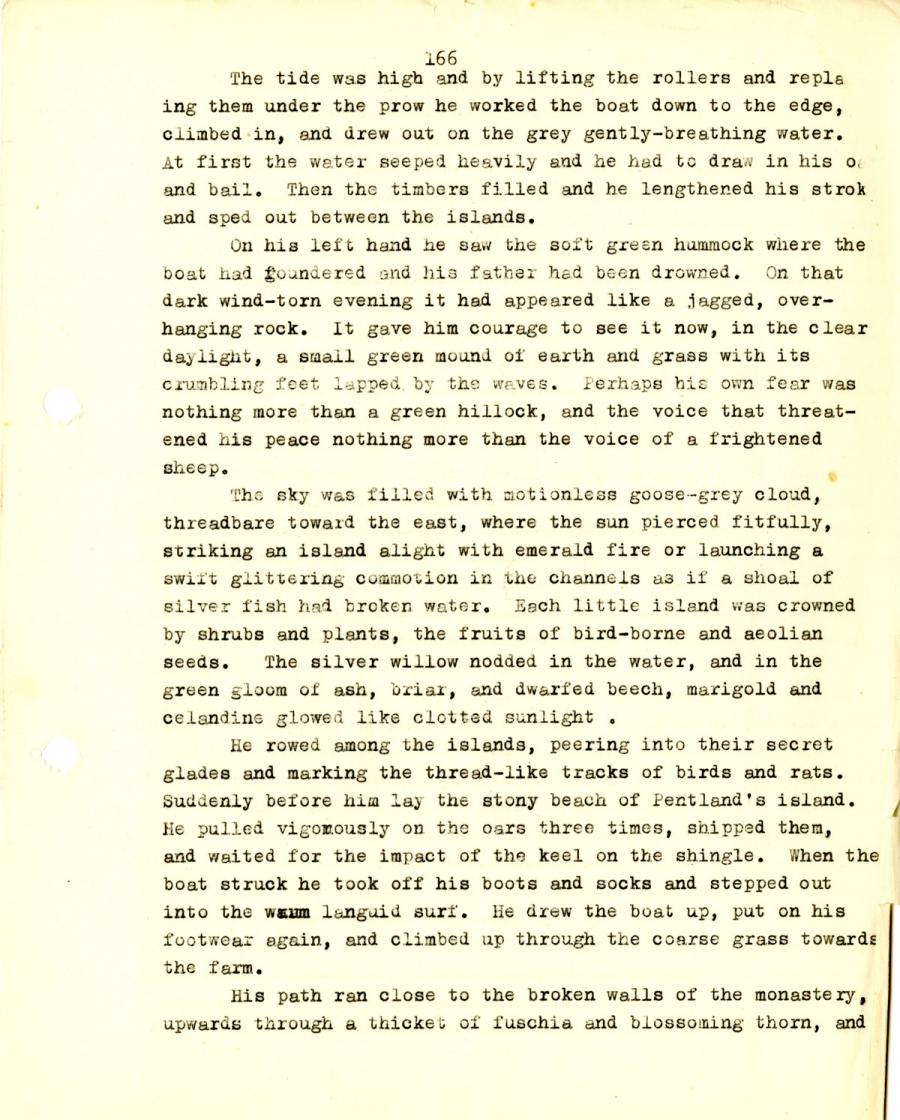 The tide was high and by lifting the rollers and repla
ing them under the prow he worked the boat down to the edge,
climbed in, and drew out on the grey gently-breathing water.
At first the water seeped heavily and he had to draw in his oar
and bail. Then the timbers filled and he lengthened his strok
and sped out between the islands.

On his left hand he saw the soft green hummock where the
boat had foundered and his father had been drowned. On that
dark wind-torn evening it had appeared like a jagged, over-
hanging rock. It gave him courage to see it now, in the clear
daylight, a small green mound of earth and grass with its
crumbling feet lapped by the waves. Perhaps his own fear was
nothing more than a green hillock, and the voice that threat-
ened his peace nothing more than the voice of a frightened
sheep.

The sky was filled with motionless goose-grey cloud,
threadbare toward the east, where the sun pierced fitfully,
striking an island alight with emerald fire or launching a
swift glittering commotion in the channels as if a shoal of
silver fish had broken water. Each little island was crowned
by shrubs and plants, the fruits of bird-borne and aeolian
seeds. The silver willow nodded in the water, and in the
green gloom of ash, briar, and dwarfed beech, marigold and
celandine glowed like clotted sunlight .

He rowed among the islands, peering into their secret
glades and marking the thread-like tracks of birds and rats.
Suddenly before him lay the stony beach of Pentland’s island.
He pulled vigorously on the oars three times, shipped them,
and waited for the impact of the keel on the shingle. When the
boat struck he took off his boots and socks and stepped out
into the warm languid surf. He drew the boat up, put on his
footwear again, and climbed up through the coarse grass towards
the farm.

His path ran close to the broken walls of the monastery,
upwards through a thicket of fuschia and blossoming thorn, and