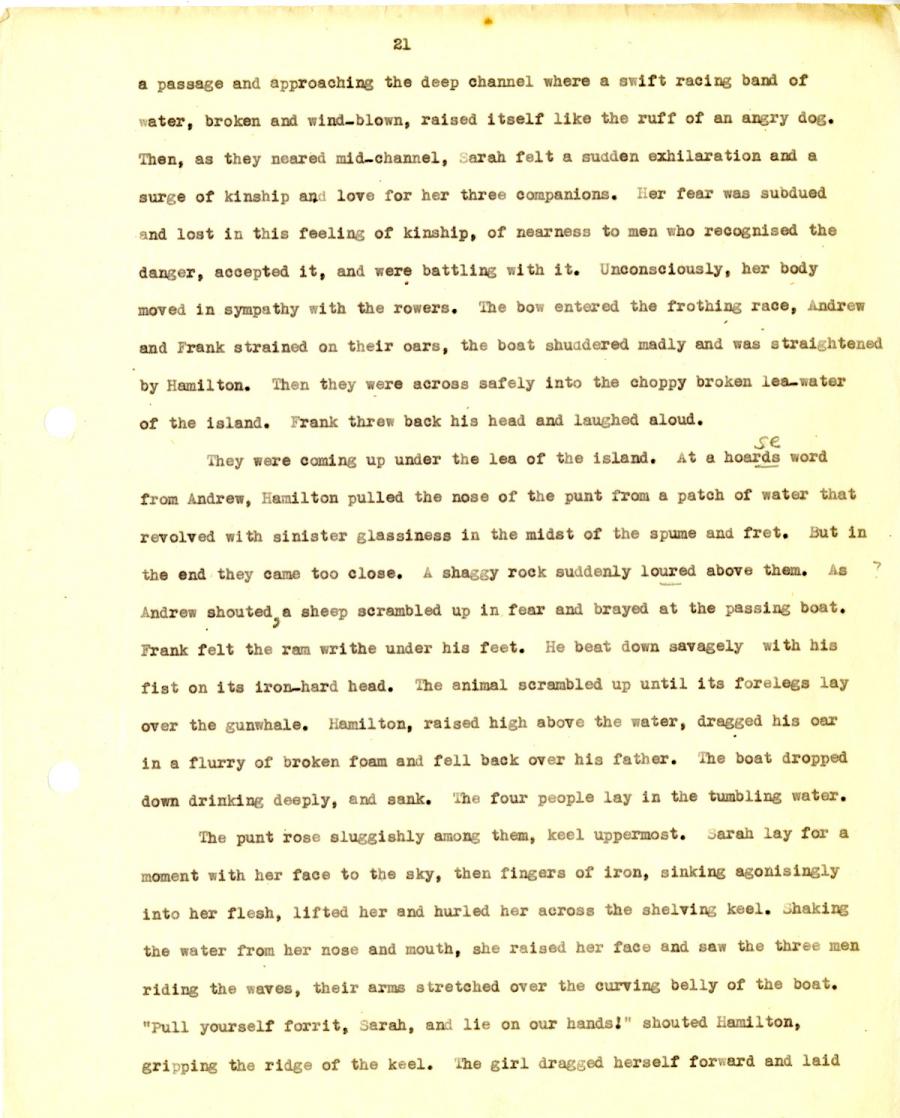 water, broken and wind-blown, raised itself like the ruff of an angry dog.

Then, as they neared mid-channel, Sarah felt a sudden exhilaration and a

surge of kinship and love for her three companions. Her fear was subdued

and lost in this feeling of kinship, of nearness to men who recognised the

danger, accepted it, and were battling with it. Unconsciously, her body

moved in sympathy with the rowers. The bow entered the frothing race, Andrew

and Frank strained on their oars, the boat shuddered madly and was straightened

by Hamilton. Then they were across safely into the choppy broken lea-water

of the island. Frank threw back his head and laughed aloud.

They were coming up under the lea of the island. At a hoardes word

from Andrew, Hamilton pulled the nose of the punt from a patch of water that

revolved with sinister glassiness in the midst of the spume and fret. But in

the end they came too close. A shaggy rock suddenly loured above them. As

Andrew shouted, a sheep scrambled up in fear and brayed at the passing boat.

Frank felt the ram writhe under his feet. He beat down savagely with his

fist on its iron-hard head. The animal scrambled up until its forelegs lay

over the gunwhale. Hamilton, raised high above the water, dragged hi3 oar

in a flurry of broken foam and fell back over his father, The boat dropped

down drinking deeply, and sank. The four people lay in the tumbling water.

The punt rose sluggishly among them, keel uppermost, Sarah lay for a

moment with her face to the sky, then fingers of iron, sinking agonisingly

into her flesh, lifted her and hurled her across the shelving keel, shaking

the water from her nose and mouth, she raised her face and saw the three men

riding the waves, their arms stretched over the curving belly of the boat.

"Pull yourself forrit, Sarah, and lie on our hands!” shouted Hamilton,

gripping the ridge of the keel. The girl dragged herself forward and laid