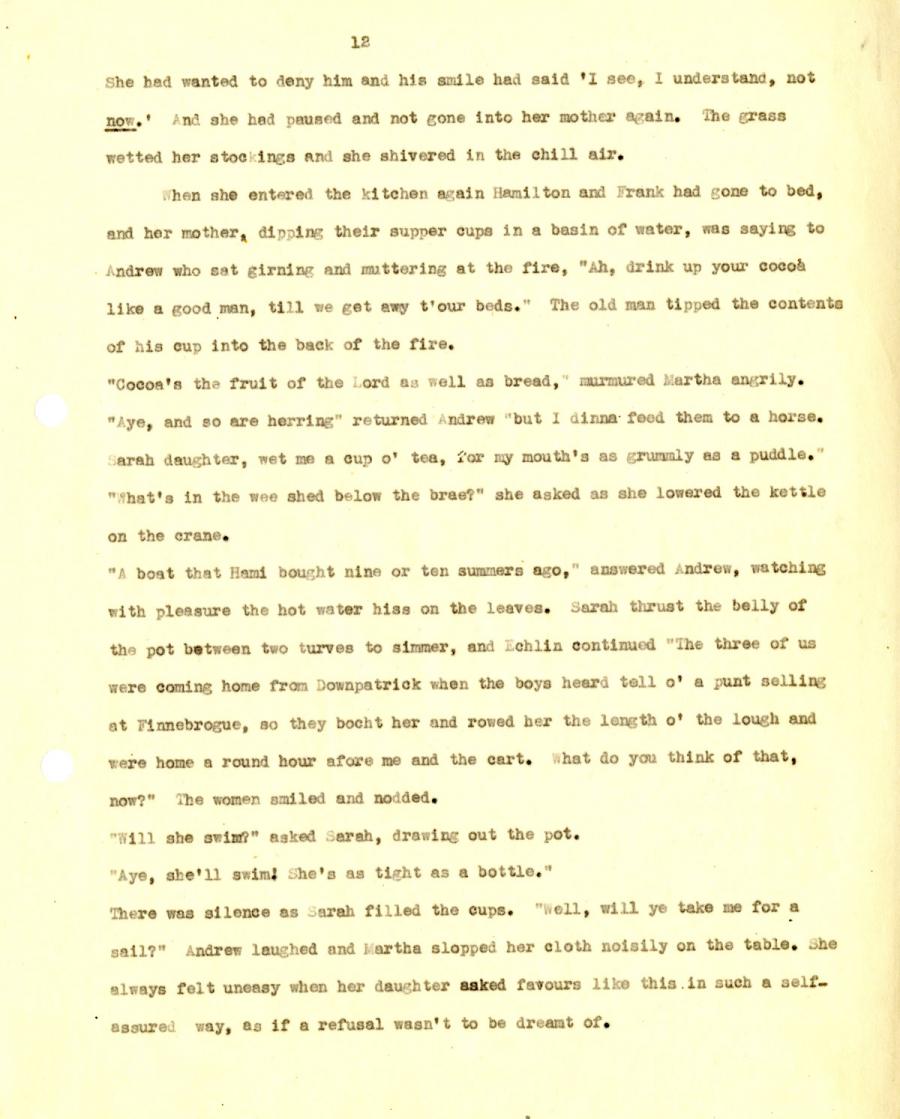 She bed wanted to deny him and his smile had said *1 see, 1 understand, not

now.' and she had paused and not gone into her mother again, The grass

wetted her stockings and she shivered in the chill air.

hen she entered the kitchen again Hamilton and Frank had gone to bed,

and her mother* dipping their supper cups in a basin of water, was saying to

Andrew who set girning and muttering at the fire, "Ah, drink up your cocoa

like a good man, till we get away t’our beds.” The old man tipped the contents

of his cup into the back of the fire,

"Cocoa's the fruit of the Lord as well aa bread, murmured Martha angrily.

"Aye, and so are hearing” returned Andrew 'but I Winna feed them to a horse.

“Sarah daughter, wet me a cup o’ tea, for my mouth’s as grurmly as a puddle,

“What's in the wee shed below the brae?" she asked as she lowered the kettle

"A boat that Sarah bought nine or ten summers ago," answered . Andrew, watching

with pleasure the hot water hiss on the leaves. Sarah thrust the belly of

the pot between two turves to simmer, and Echlin continued '"The three of us

at Finnebrogue, so they bought her and rowed her the length o* the Lough and

were home a round hour afore me and the cart. what do you think of that,

now?" the women smiled and nodded.

Will she Niinr?" asked Sarah, drawing out the pot.

Aye, she’ll swim! her as tight as a bottle.'

'Ihere was silence as Sarah filled the cups. "Well, will ye take roe for a

sail?" Andrew laughed and Martha slopped her cloth noisily on the table, She

always felt uneasy when her daughter asked favours like this.in such a self-

assured way, as if a refusal wasn't to be dreamt of.