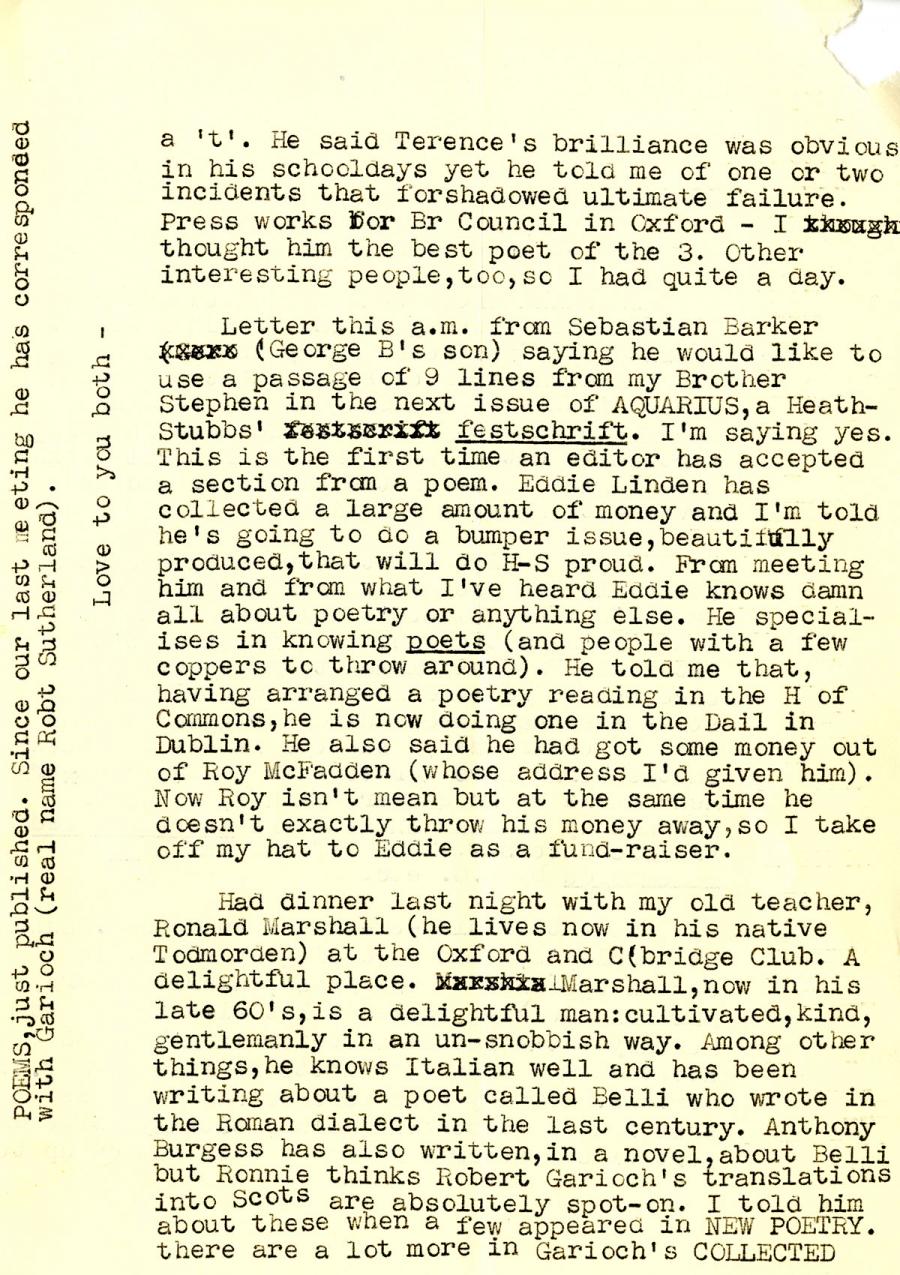 ﻿
a 't'. He said Terence’s brilliance was obvious
in his schooldays yet he told me of one or two
incidents that forshadowed ultimate failure.
Press works for Br Council in Oxford - I
thought him the best poet of the 3. Other
interesting people,too,so I had quite a day.

Letter this a.m. from Sebastian Barker
(George B’s son) saying he would like to
use a passage of 9 lines from my Brother
Stephen in the next issue of AQUARIUS,a Heath-
Stubbs’ festschrift. I’m saying yes.

This is the first time an editor has accepted
a section fran a poem. Eddie Linden has
collected a large amount of money and I'm told
he's going to do a bumper issue,beautifully
produced,that will do H-S proud. From meeting
him and iron what I've heard Eddie knows damn
all about poetry or anything else. He special-
ises in knowing poets (and people with a few
coppers to throw around). He told me that,
having arranged a poetry reading in the H of
Commons,he is new doing one in the Dail in
Dublin. He also said he had got some money out
of Roy McFadden (whose address I'd given him).
Now Roy isn't mean but at the same time he
doesn't exactly throw his money away,so I take
off my hat to Eddie as a fund-raiser.

Had dinner last night with my old teacher,
Ronald Marshall (he lives now in his native
Todmorden) at the Oxford and C(bridge Club. A
delightful place, Marshall,now in his
late 60's,is a delightful man:cultivated,kind,
gentlemanly in an un-snobbish way. Among other
things,he knows Italian well and has been
writing about a poet called Belli who wrote in
the Roman dialect in the last century. Anthony
Burgess has also written,in a novel,about Belli
but Ronnie thinks Robert Garioch’s translations
into Scots are absolutely spot-on. I told him
about these when a few appeared in NEW POETRY,
there are a lot more in Garioch's COLLECTED POEMS
just published since our last meeting he has corresponded
with Garioch (real name Robt Sutherland).
Love to you both-