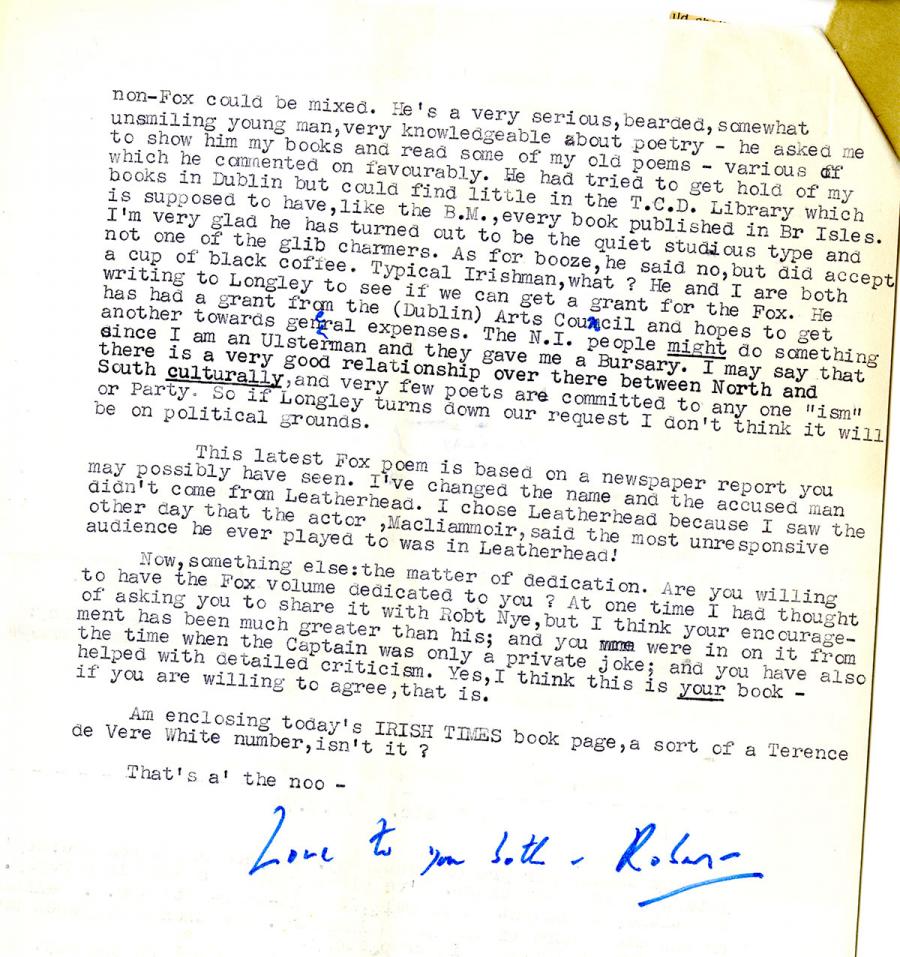 ﻿non-Fox could be mixes. He's a very serious, bearded, somewhat
unsmiling young man,very knowledgeable about poetry - he asked me
to show him my books and read some of my old poems - various of
which he commented on favourably. He had tried to get hold of my
books in Dublin but could find little in the T.C.D. Library which
is supposed to have,like the B.M.,every book published in Br Isles.
I'm very glad he has turned out to be the quiet studious type and
not one of the glib charmers. As for booze,he said no,but did accept
a cup of black coffee. Typical Irishman,what ? He and I are both
writing to Longley to see if we can get a grant for the Fox. He
has had a grant from the (Dublin) Arts Council and hopes to get
another towards general expenses. The N.I. people might do something
since I am an Ulsterman and they gave me a Bursary. I may say that
there is a very good relationship over there between North and
South culturally,and very few poets are committed to any one "ism"
or Party. So if Longley turns down our request I don't think it will
be on political grounds.

This latest Fox poem is based on a newspaper report you
may possibly have seen. I've changed the name and the accused man
didn't come from Leatherhead. I chose Leatherhead because I saw the
other day that the actor ,Macliammoir,said the most unresponsive
audience he ever played to was in Leatherhead.'

Now,something else:the matter of dedication. Are you willing
to have the Fox volume dedicated to you ? At one time I had thought
of asking you to share it with Robt Nye,but I think your encourage-
ment has been much greater than his; and you were in on it from
the time when the Captain was only a private joke; and you have also
helped with detailed criticism. Yes,I think this is your book -
if you are willing to agree,that is.