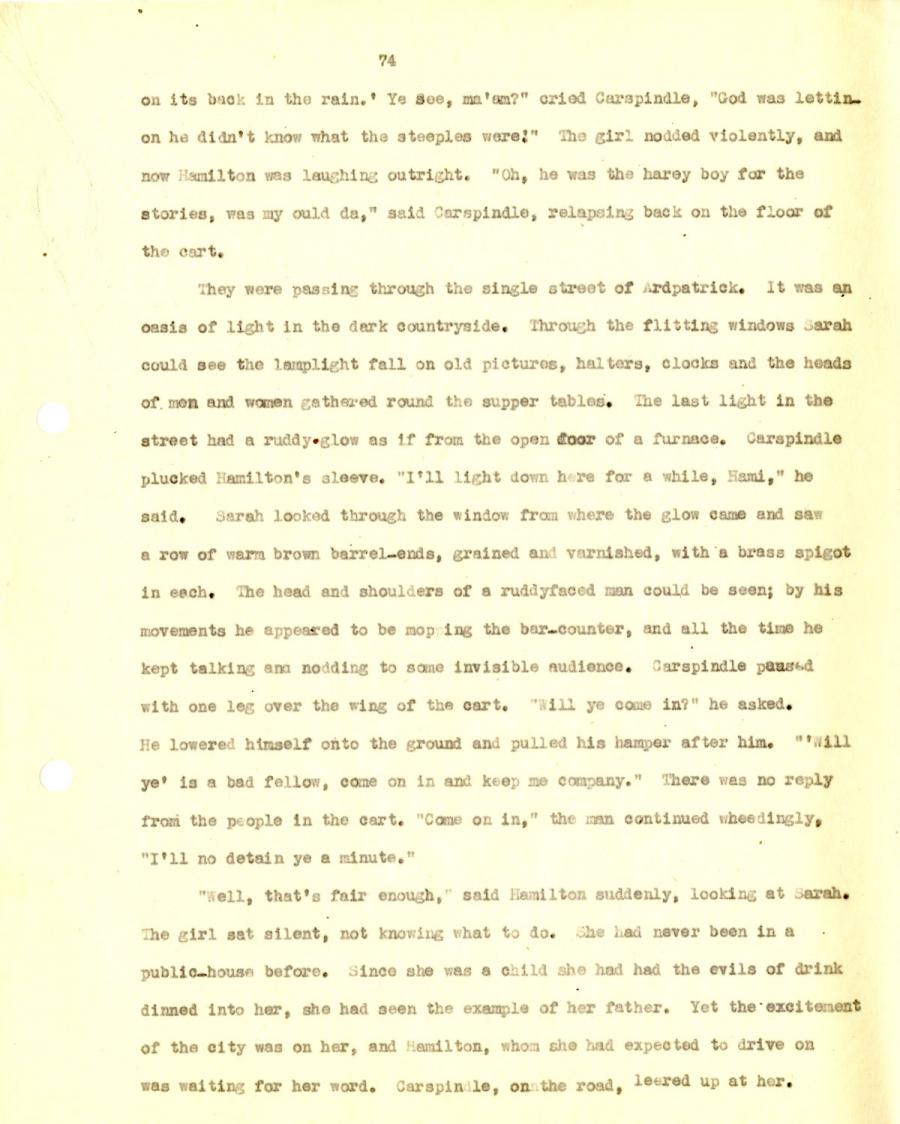 on its back In the rain.’ Ye see, ma'am?" cried Carspindle, "God was lettin’
on he didn't know what the steeples wore;" The girl nodded violently, and
now Hamilton ma laughing outright. "Oh, he was the harey boy .for the
stories, was my ould da," said Carspindle, relapsing back on the floor of
the cart.

They were passing through the single street of Ardpatrick. It was an
oasis of light in the dark countryside, through the flitting windows Sarah
could see the lamplight fall on old pictures, halters, clocks and the heads
of men and women gathered round the supper tables. The last light in the
street had a ruddy glow as if from the open door of a furnace. Carspindle
plucked Hamilton's sleeve. "I’ll light down here for a while, Hami," he
said. Sarah looked through the window from where the glow came and saw
a row of warm brown barrel-ends, grained and varnished, with a brass spigot
in each. The head and shoulders of a ruddyfaced man could be seen; by his
movements he appeared to be mopping the bar-counter, and all the time he
kept talkin' and nodding to same invisible audience.Carspindle passed
with one leg over the wing of the cart. “Will ye oome in?" he asked.

He lowered himself onto the ground and pulled his hamper after him. “Will
ye’ is a bad fellow, come on in and keep me company." There was no reply
from the people in the cart. "Came on in," the man continued wheedingly,
"I'll no detain ye a minute."

“Well, that’s fair enough, said Hamilton suddenly, looking at Sarah.
The girl sat silent, not knowing what to do. She Had never been in a
public-house before. Since she was a child she had had the evils of drink
dinned into her, she had seen the example of her father. Yet the-excitement
of the city was on her, and Hamilton, whom she had expected to drive on
was waiting for her word. Carspindle, on the road, leered up at her.