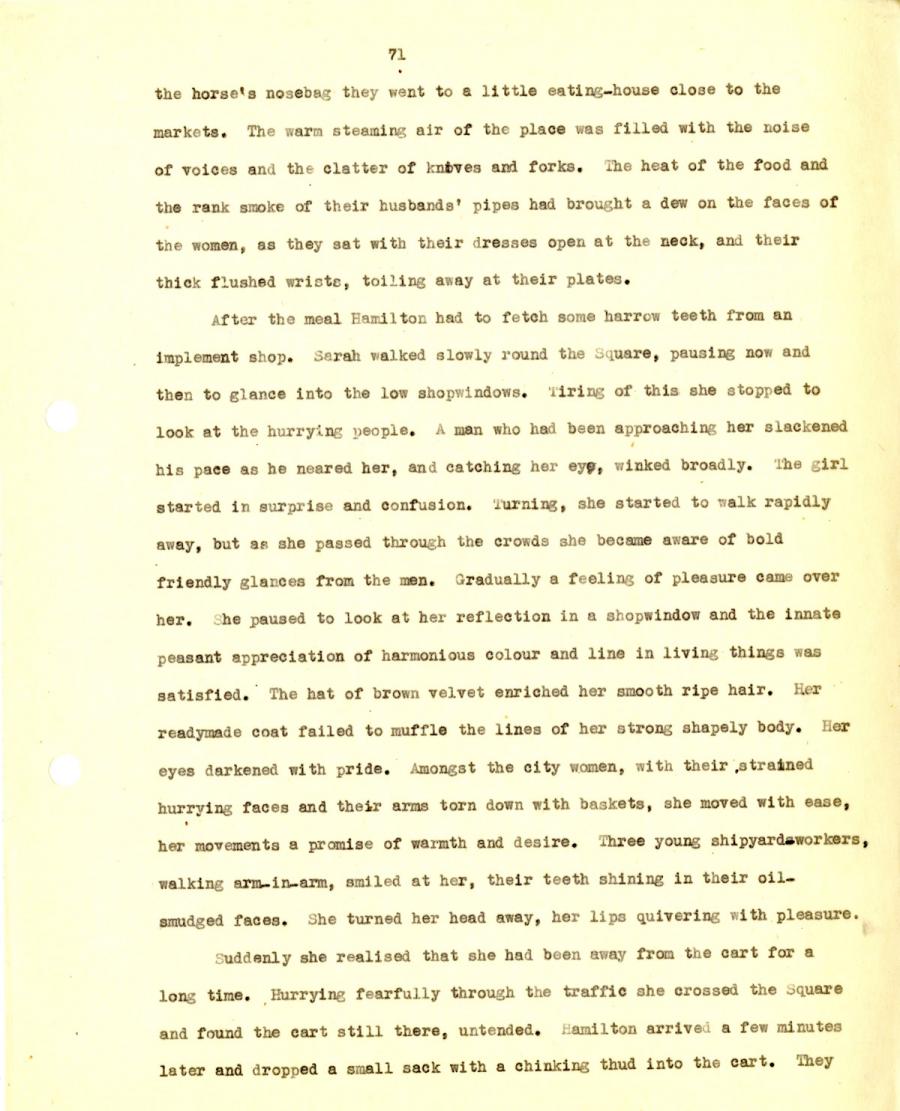 the horse’s nosebag they went to a little eating-house close to the
markets. The warm steaming air of the place was filled with the noise
of voices and the clatter of knives and forks. The heat of the food and
the rank smoke of their husbands’ pipes had brought a dew on the faces of
the women, as they sat with their dresses open at the neck, and their
thick flushed wrists, toiling away at their plates.

After the meal Hamilton had to fetch some harrow teeth from an
implement shop. Sarah walked slowly round the square, pausing now and
then to glance into the low shop windows. Tiring of this she stopped to
look at the hurrying people. A man who had been approaching her slackened
his pace as he neared her, and catching her eye, winked broadly. The girl
started in surprise and confusion. Turning, she started to walk rapidly
away, but as she passed through the crowds she became aware of bold
friendly glances from the men. Gradually a feeling of pleasure came over
her. She paused to look at her reflection in a shopwindow and the innate
peasant appreciation of harmonious colour and line in living things was
satisfied. The hat of brown velvet enriched her smooth ripe hair. Her
readymade coat failed to muffle the lines of her strong shapely body, her
eyes darkened with pride. Amongst the city women, with their strained
hurrying faces and their arms torn down with baskets, she moved with ease,
her movements a promise of warmth and desire. Three young shipyard workers,
walking arm-in-arm, smiled at her, their teeth shining in their oil-
smudged faces. She turned her head away, her lips quivering with pleasure.

Suddenly she realised that she had been away from the cart for a
long time. Hurrying fearfully through the traffic she crossed the square
and found the cart still there, untended. Hamilton arrived a few minutes
later and dropped a small sack with a chinking thud into the cart. They