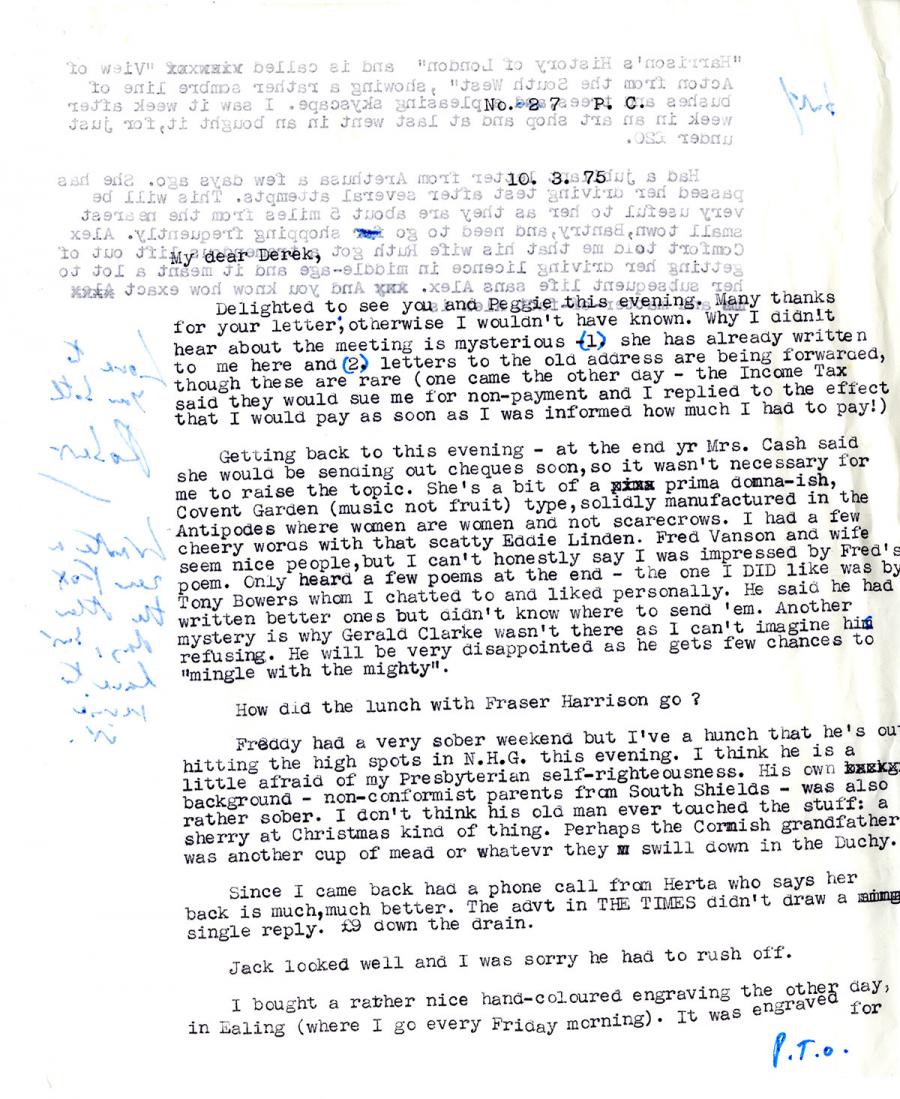 Delighted to see you and Peggie this evening. Many thanks
for your letter; otherwise I wouldn't have known. Why I didn't
hear about the meeting is mysterious (1) she has already written
to me here and (2) letters to the old address are being forwarded,
though these are rare (one came the other day - the Income Tax
said they would sue me for non-payment and I replied to the effect
that I would pay as soon as I was informed how much I had to pay!)

Getting back to this evening - at the end yr Mrs. Cash said
she would be sending out cheques soon,so it wasn't necessary for
me to raise the topic. She's a bit of a prima domna-ish,
Covent Garden (music not fruit) type,solidly manufactured in the
Antipodes where women are women and not scarecrows. I had a few
cheery words with that scatty Eddie Linden. Fred Vanson and wife
seem nice people,but I can't honestly say I was impressed by Fred's
poem. Only heard a few poems at the end - the one I DID like was by
Tony Bowers whom I chatted to and liked personally. He said he had
written better ones but didn't know- where to send 'em. Another
mystery is why Gerald Clarke wasn't there as I can't imagine his
refusing. He will be very disappointed as he gets few chances to
"mingle with the mighty".

How dxd the lunch with Fraser Harrison go ?

Freddy had a very sober weekend but I've a hunch that he's out
hitting the high spots in N.H.G. this evening. I think he is a
little afraid of my Presbyterian self-righteousness. His own
background - non-conformist parents from South Shields - was also
rather sober. I don't think his old man ever touched the stuff: a
sherry at Christmas kind of thing. Perhaps the Cornish grandfather
was another cup of mead or whatevr they swill down in the Duchy.

Since I came back had a phone call from Herta who says her
back is much,much better. The advt in THE TIMES didn't draw a
single reply. £9 down the drain.

Jack looked well and I was sorry he had to rush off.

a rather nice hand-coloured engraving the other day,
in Ealing (where I go every Friday morning). It was engraved for
P.T.O

in Ealing (where I go every Friday morning)•