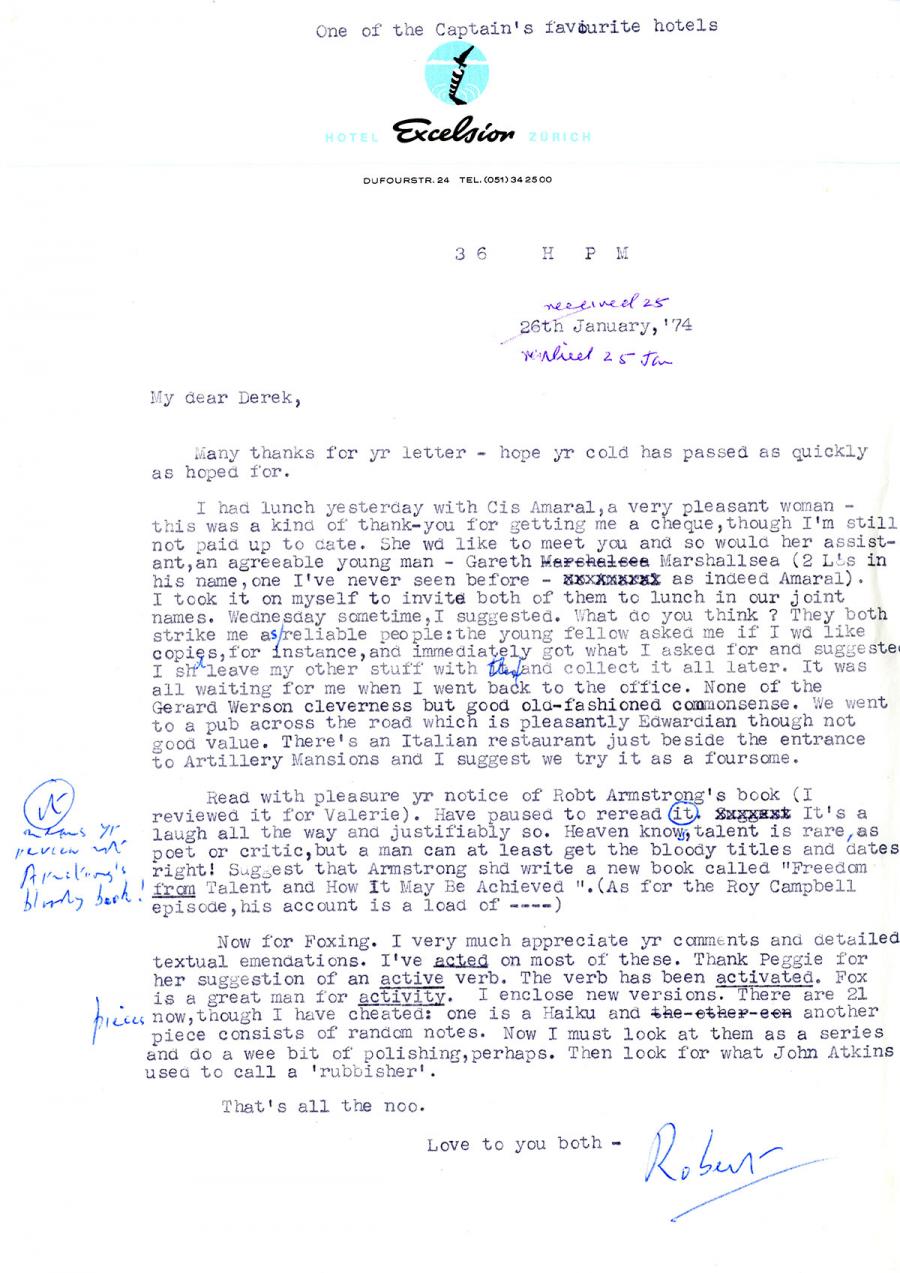 Many thanks for yr letter - hope yr cold has passed as quickly
as hoped for.

I had lunch yesterday with Cis Amaral,a very pleasant woman -
this was a kind of thank-you for getting me a cheque,though I'm still
not paid up to date. She wd like to meet you and so would her assist-
ant,an agreeable young man - Gareth Marshallsea (2 L's in
his name,one I've never seen before - as indeed Amaral).
I took it on myself to invite both of them to lunch in our joint
names. Wednesday sometime,I suggested. What do you think ? They both
strike me as reliable people:the young fellow asked me if I wd like
copies,for instance,and immediately got what I asked for and suggested
I shd leave my other stuff with them and collect it all later. It was
all waiting for me when I went back to the office. None of the
Gerard Werson cleverness but good old-fashioned common sense. We went
to a pub across the road which is pleasantly Edwardian though not
good value. There's an Italian restaurant just beside the entrance
to Artillery Mansions and I suggest we try it as a foursome.

Read with pleasure yr notice of Eobt Armstrong's book (I
reviewed it for Valerie). Have paused to reread it it: means yr review not
Armstrong's bloody book! Heaven knows,talent is rare, as poet or critic,but a man can at least
get the bloody titles and dates right! Suggest that Armstrong shd write a
new book called "Freedom from Talent and How It May Be Achieved ".
(As for the Roy Campbell episode,his account is a load of--------)

Now for Foxing. I very much appreciate yr comments and detailed
textual emendations. I've acted on most of these. Thank Peggie for
her suggestion of an active verb. The verb has been activated.
Fox is a great man for activity. I enclose new versions. There are 21
pieces now,though I have cheated: one is a Haiku and piece consists of random notes. Now I must look at them as a series
and do a wee bit of polishing,perhaps. Then look for what John Atkins
used to call a 'rubbisher'.

That's all the noo.