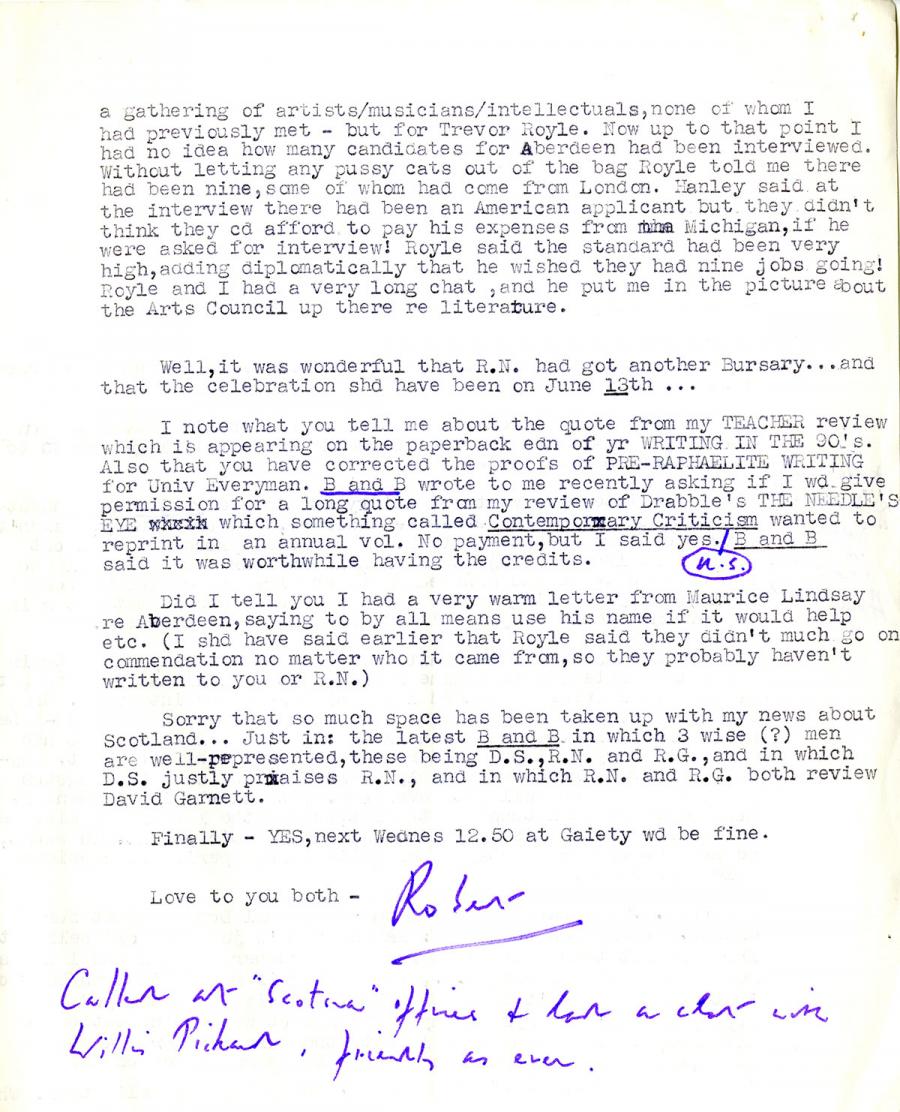 ﻿a gathering of artists/musicians/intellectuals,none of whom I
had previously met - but for Trevor Royle. Now up to that point I
had no idea how many candidates for Aberdeen had been interviewed.
Without letting any pussy cats out of the bag Royle told me there
had been nine,some of whom had come from London. Hanley said at
the interview there had been an American applicant but they didn’t
think they cd afford to pay his expenses from Michigan,if he
were asked for interview! Royle said the standard had been very
high,adding diplomatically that he wished they had nine jobs going!
Royle and I had a very long chat ,and he put me in the picture about
the Arts Council up there re literature.

Well,it was wonderful that R.N. had got another Bursary...and
that the celebration shd have been on June 13th ...

I note what you tell me about the quote from my TEACHER review
which is appearing on the paperback edn of yr WRITING IN THE 30.' s.
Also that you have corrected the proofs of PRE-RAPHAELITE WRITING
for Univ Everyman. B and B wrote to me recently asking if I wd.give
permission for a long quote from my review of Drabble's THE NEEDLE'S
EYE which something called Contemporary Criticism wanted to
reprint in an annual vol. No payment, but I said yes. B and B
said it was worthwhile having the credits.

Did I tell you I had a very warm letter from Maurice Lindsay
re Aberdeen,saying to by all means use his name if it would help
etc. (I shd have said earlier that Royle said they didn’t much go on
commendation no matter who it came from,so they probably haven't
written to you or R.N.)

Sorry that so much space has been taken up with my news about
Scotland... Just in: the latest B and B. in which 3 wise (?) men
are well-pepresented,these being D.S.,R.N. and R.G.,and in which
D.S. justly praises R.N., and in which R.N. and R.G. both review
David Garnett.

Called at "Scotsman" offices + had a chat with Willis Pickard, friendly as ever.n