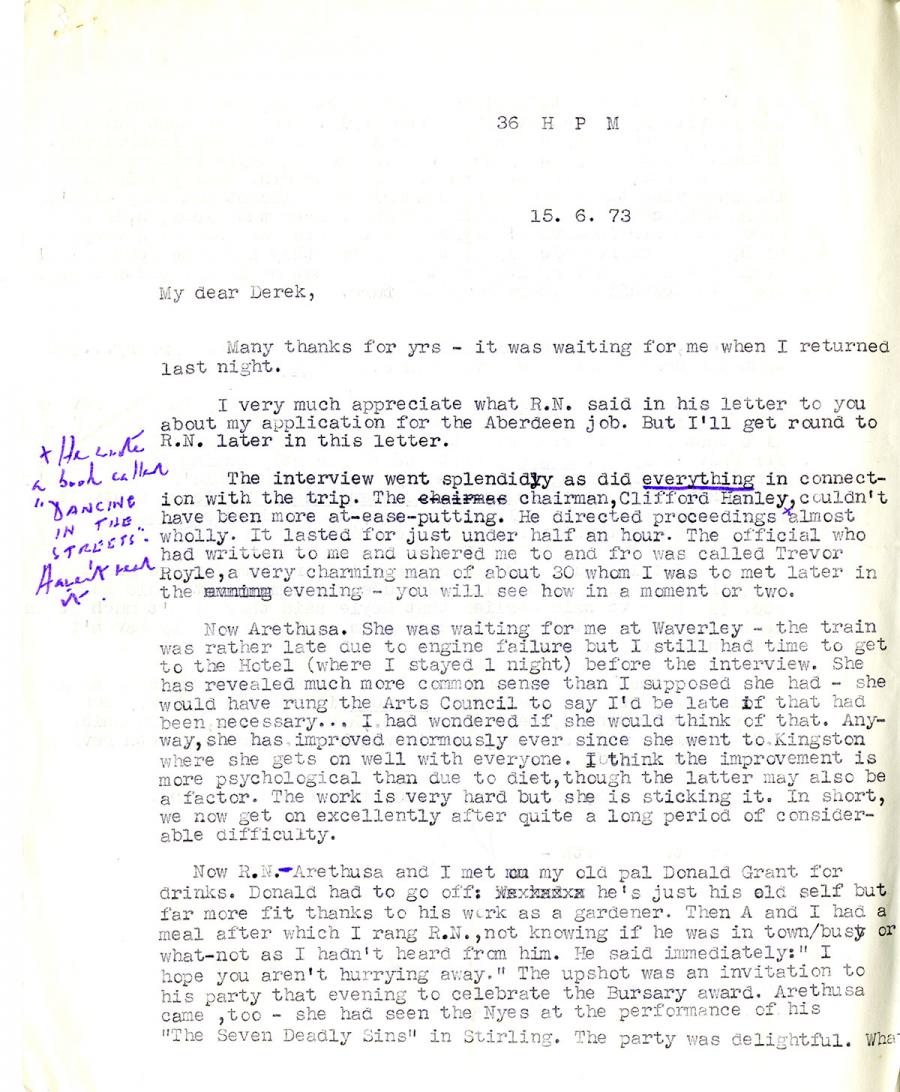 Many thanks for yrs - it was waiting for me when I returned
last night.

I very much appreciate what R.N. said in his letter to you
about my application for the Aberdeen job. But I'll get round to
R.N. later in this letter.

The interview went splendidly as did everything in connect-
ion with the trip. The chairman,Clifford Hanley x,
couldn't have been more at-ease-putting. He directed proceedings
wholly. It lasted for just under half an hour. The official who
. had written to me and ushered me to and fro was called Trevor
Royle, a very charming man of about 30 whom I was to met later in
the evening - you will see how in a moment or two.

Now Arethusa. She was waiting for me at Waverley - the train
was rather late due to engine failure but I still had time to get
to the Hotel (where I stayed 1 night) before the interview. She
has revealed much more common sense than I supposed she had - she
would have rung the Arts Council to say I'd be late if that had
been necessary... I had wondered if she would think of that. Any-
way, she has improved enormously ever since she went to Kingston
where she gets on well with everyone. I think the improvement is
more psychological than due to diet,though the latter may also be
a factor. The work is very hard but she is sticking it. In short,
we now get on excellently after quite a long period of consider-
able difficulty.

Now R.N.-Arethusa and I met my old pal Donald Grant for
drinks. Donald had to go off: he's just his old self but
far more fit thanks to his work as a gardener. Then A and I had a
meal after which I rang R.N.,not knowing if he was in town/busy or
what-not as I hadn't heard from him. He said immediately:" I
hope you aren't hurrying away." The upshot was an invitation to
his party that evening to celebrate the Bursary award. Arethusa
came ,too - she had seen the Nyes at the performance of his
"The Seven Deadly Sins" in Stirling. The party was delightful. What