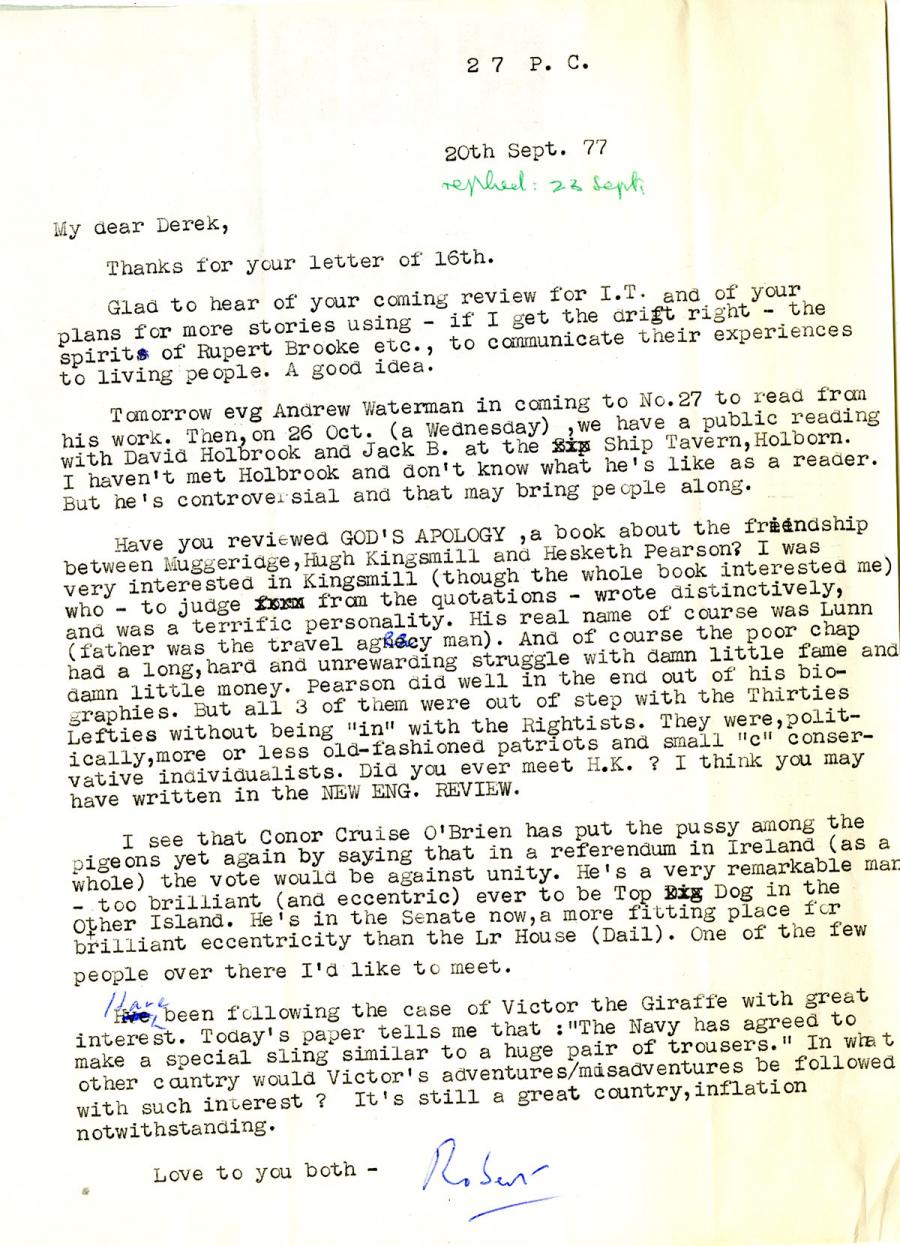 Thanks for your letter of 16th.

Glad to hear of your coming review for I.T. and of your
plans for more stories using - if I get the drift right - the
spirit of Rupert Brooke etc., to communicate their experiences
to living people. A good idea.

Tomorrow evg Andrew Waterman in coming to No.27 to read from
his work. Then,on 26 Oct. (a Wednesday) ,we have a public reading
with David Holbrook and Jack B. at the Ship Tavern,Holborn.

I haven’t met Holbrook and don’t know what he's like as a reader.
But he's controversial and that may bring people along.

Have you reviewed GOD'S APOLOGY ,a book about the friendship
between Muggeridge,Hugh Kingsmill and Hesketh Pearson? I was
very interested in Kingsmill (though the whole book interested me)
who - to judge from the quotations - wrote distinctively,
and was a terrific personality. His real name of course was Lunn
(father was the travel agency man). And of course the poor chap
had a long,hard and unrewarding struggle with damn little fame and
damn little money. Pearson did well in the end out of his bio-
graphies. But all 3 of them were out of step with the Thirties
Lefties without being "in" with the Rightists. They were,polit-
ically,more or less old-fashioned patriots and small "c" conser-
vative individualists. Did you ever meet H.K. ? I think you may
have written in the NEW ENG. REVIEW.

I see that Conor Cruise O'Brien has put the pussy among the
pigeons yet again by saying that in a referendum in Ireland (as a
whole) the vote would be against unity. He's a very remarkable man
-too brilliant (and eccentric) ever to be Top Dog in the
Other Island. He's in the Senate now,a more fitting place for
brilliant eccentricity than the Lr House (Dail). One of the few
people over there I'd like to meet.

Have been following the case of Victor the Giraffe with great
interest. Today's paper tells me that : "The Navy has agreed to
make a special sling similar to a huge pair of trousers." In what
other country would Victor's adventures/misadventures be followed
with such interest ? It's still a great country,inflation
notwithstanding.