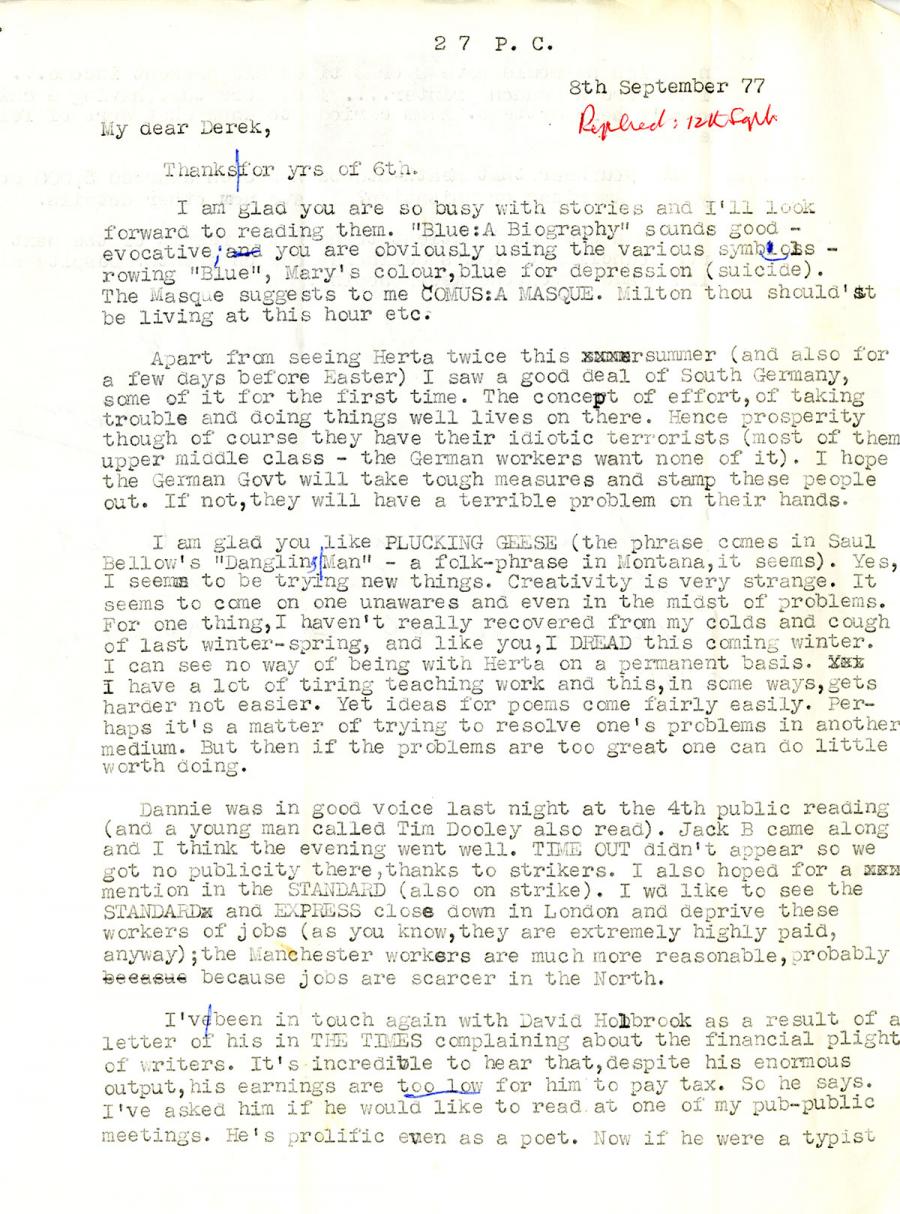 Thanks for yrs of 6th.

I am glad you are so busy with stories and I'll look
forward to reading them. "Blue:A Biography" sounds good -
evocative you are obviously using the various symbols -
rowing "Blue", Mary's colour,blue for depression (suicide).
The Masque suggests to me COMUS:A MASQUE. Milton thou should'st
be living at this hour etc.

Apart from seeing Herta twice this summer (and also for
a few days before Easter) I saw a good deal of South Germany,
some of it for the first time. The concept of effort,of taking
trouble and doing things well lives on there. Hence prosperity
though of course they have their idiotic terrorists (most of them
upper middle class - the German workers want none of it). I hope
the German Govt will take tough measures and stamp these people
out. If not,they will have a terrible problem on their hands.

I am glad you .like PLUCKING GEESE (the phrase ccmes in Saul
Bellow's "Dangling Man" - a folk-phrase in Montana,it seems). Yes,
I seemm to be trying new things. Creativity is very strange. It
seems to come on one unawares and even In the midst of problems.
For one thing,I haven't really recovered from my colds and cough
of last winter-spring, and like you,I DREAD this coming winter.

I can see no way of being with Herta on a permanent basis.
I have a lot of tiring teaching work and this,in some ways,gets
harder net easier. Yet ideas for poems come fairly easily. Per-
haps it's a matter of trying to resolve one's problems in another
medium. But then if the problems are too great one can do little
worth doing.

Dannie was in good voice last night at the 4th public reading
(and a young man called Tim Dooley also read). Jack B came along
and I think the evening went well. TIME OUT didn't appear so we
got no publicity there,thanks to strikers. I also hoped for a
mention in the STANDARD (also on strike). I wd like to see the
STANDARD and EXPRESS close down in London and deprive these
workers of jobs (as you know,they are extremely highly paid,
anyway);the Manchester workers are much more reasonable,probably
because joos are scarcer in the North.

I've been in touch again with David Holbrook as a result of a
letter or his in THE TIMES complaining about the financial plight
of writers. It's incredible to hear that,despite his enormous
output,his earnings are too -low for him to pay tax. So he says.
I've asked him if he would like to read at one of my pub-public

meetings. He's prolific even as a poet. Now if he were a typist