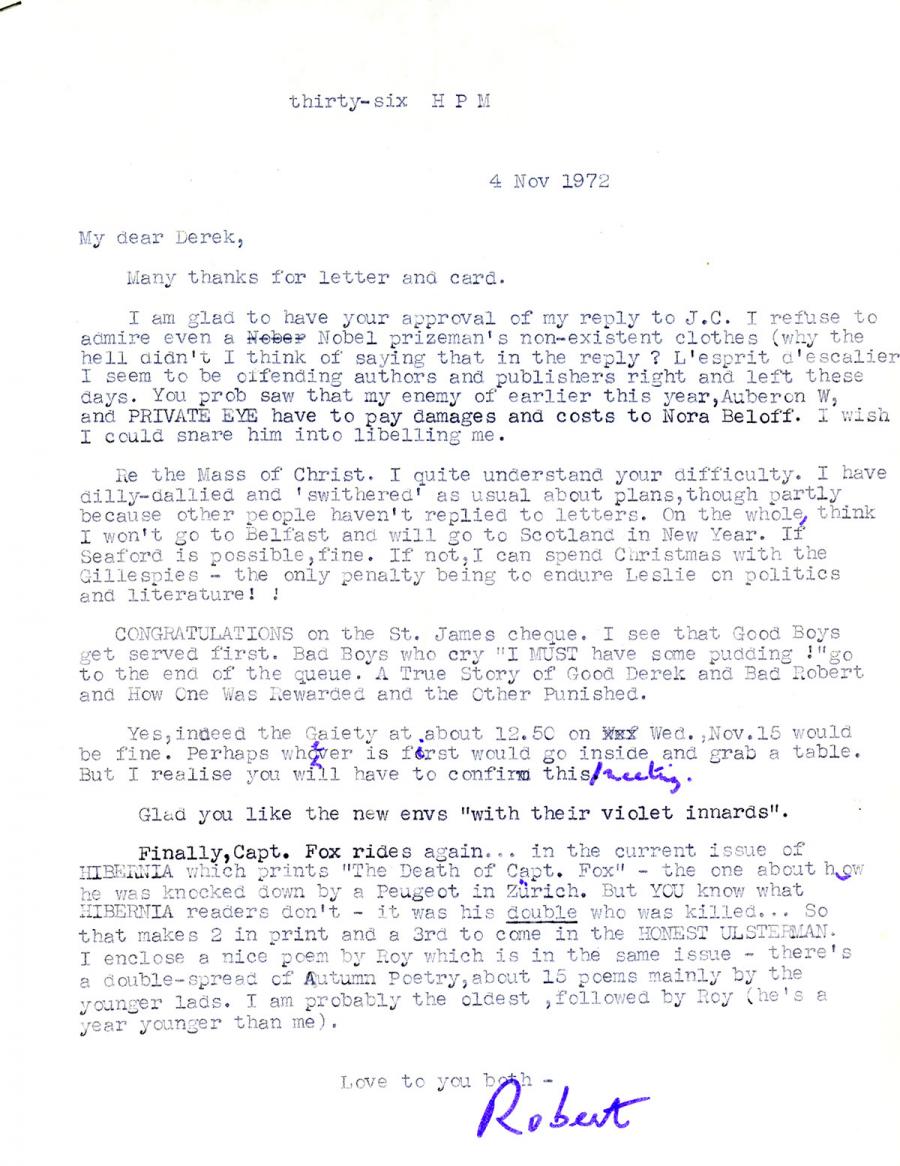 Many thanks for letter and card.

I am glad to have your approval of my reply to J.C. I refuse to
admire even a Nobel prizeman's non-existent clothes (why the
hell didn't I think of saying that in the reply ? L'esprit a'escalier
I seem to be offending authors and publishers right and left these
days. You prob saw that my enemy of earlier this year,Auberon W,
and PRIVATE EYE have to pay damages and costs to Nora Beloff. I wish
I could snare him into libelling me.

Re the Mass of Christ. I quite understand your difficulty. I have
dilly-dallied and 'swithered' as usual about plans,though partly
because other people haven't replied to letters. On the whole, think
I won't go to Belfast and will go to Scotland in New Year. If
Seaford is possible,fine. If not,I can spend Christmas with the
Gillespies - the only penalty being to endure Leslie on politics
and literature!!

CONGRATULATIONS on the St. James cheque. I see that Good Boys
get served first. Bad Boys who cry "I MUST have seme pudding J"go
to the end of the queue. A True Story of Good Derek and Bad Robert
and How One Was Rewarded and the Other Punished.

Yes,indeed the Gaiety at about 12.50 on Wed.-Nov.15 would
be fine. Perhaps whoever is first would go inside and grab a table.
But I realise you will have to confirm this meeting.

Glad you like the new envs "with their violet innards".

Finally,Capt. Fox rides again.-. in the current issue of
HIBERNIA which prints "The Death of Capt. Fox" - the one about how
he was knocked down by a Peugeot in Zurich. But YOU know what
HIBERNIA readers don't - it was his double who was killed... So
that makes 2 in print and a 3rd to come in the HONEST ULSTERMAN.

I enclose a nice poem by Roy which is in the same issue - there's
a double-spread of Autumn Poetry,about 15 poems mainly by the
younger lads. I am probably the eldest ,followed by Roy (he's a
year younger than me).