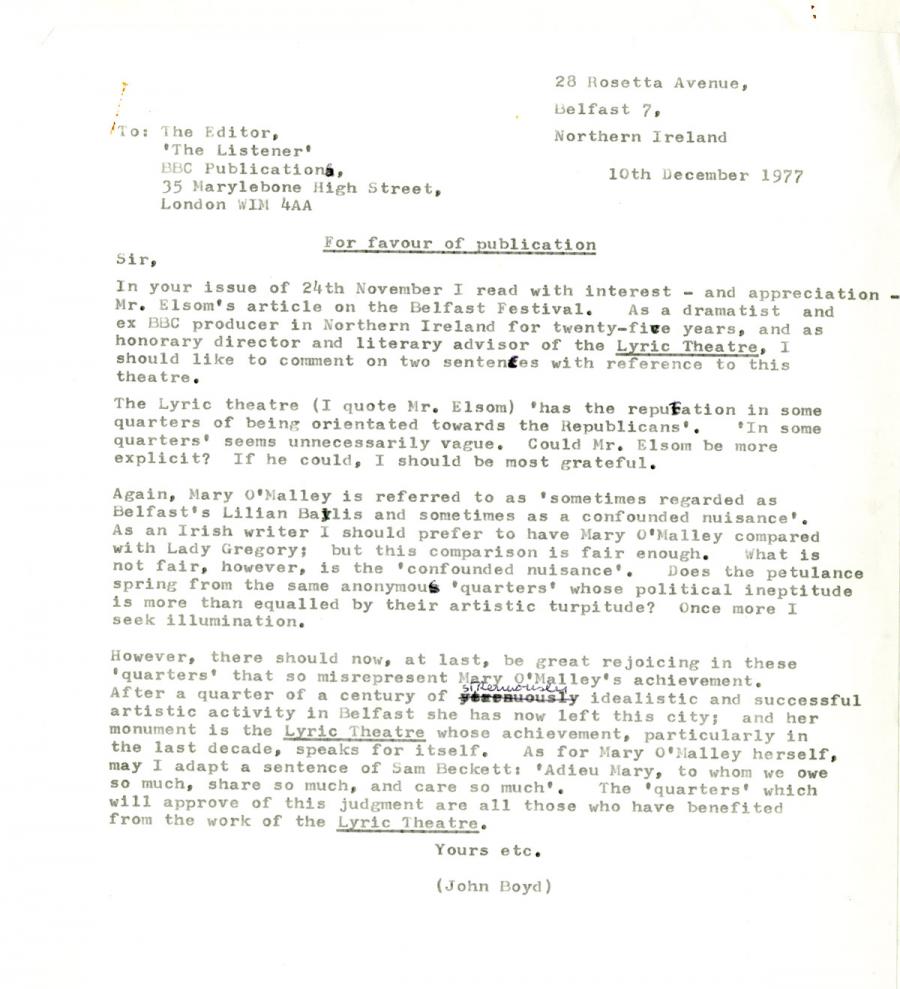 For favour of publication

In your issue of 24th November I read with interest - and appreciation
Mr. Elsom's article on the Belfast Festival. As a dramatist and
ex BBC producer in Northern Ireland for twenty-five years, and as
honorary director and literary advisor of the Lyric Theatre, I
should likce to comment on two sentences with reference to this
theatre.

The Lyric theatre (I quote Mr. Elsom) 'has the reputation in some
quarters of being orientated towards the Republicans'. 'In some
quarters' seems unnecessarily vague. Could Mr. Elsom be more
explicit? If he could, I should be most grateful.

Again, Mary O'Malley is referred to as 'sometimes regarded as
Belfast's Lilian Baylis and sometimes as a confounded nuisance'.
As an Irish writer I should prefer to have Mary O'Malley compared
with Lady Gregory; but this comparison is fair enough, What is
not fair, however, is the 'confounded nuisance'. Does the petulance
spring from the same anonymous 'quarters' whose political ineptitude
is more than equalled by their artistic turpitude? Once more I
seek illumination.

However, there should now, at last, be great rejoicing in these
'quarters' that so misrepresent Mary O'Malley's achievement.
After a quarter of a century of strenuously idealistic and successful
artistic activity in Belfast she has now left this city; and her
monument is the Lyric theatre whose achievement, particularly in
the last decade, speaks for itself. As for Mary O'Malley herself,
may I adapt a sentence of Sam Beckett: 'Adieu Mary, to whom we owe
so much, share so much, and care so much'. The 'quarters' which
will approve of this judgment are all those who have benefited
from the work of the Lyric Theatre.