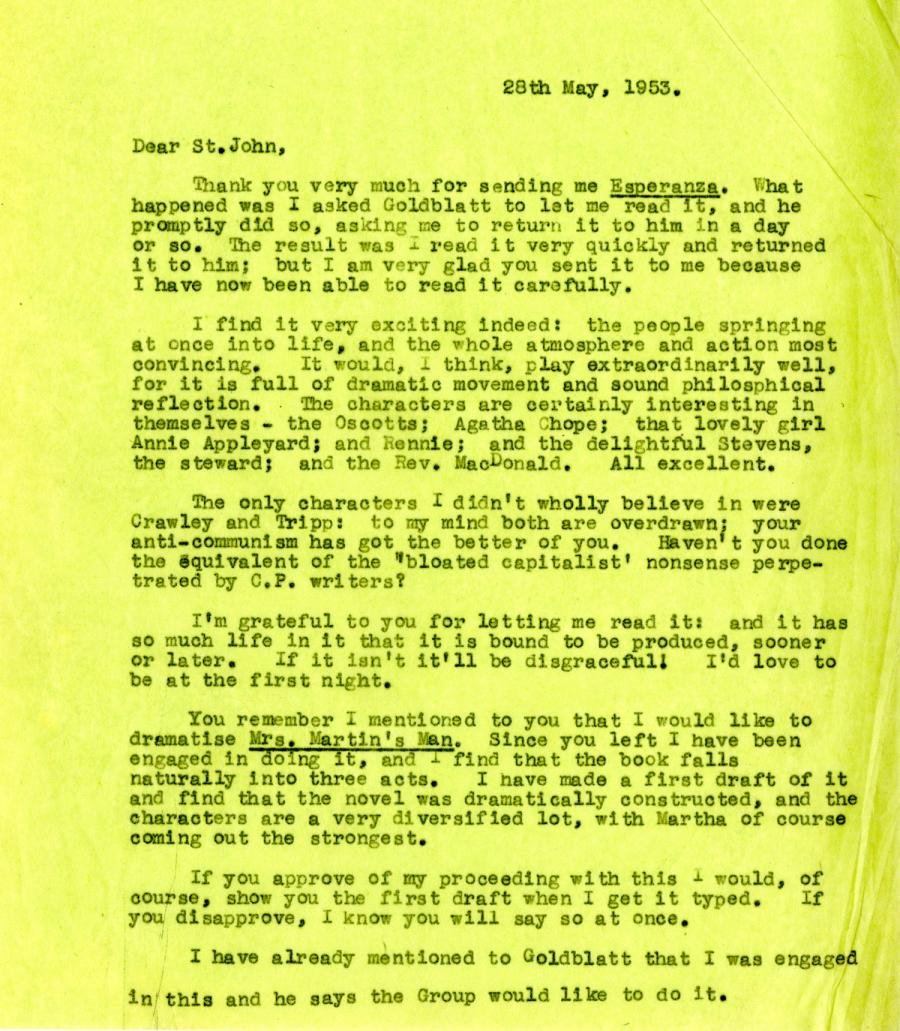 Thank you very much for sending me Esperanza. What
happened was I asked Goldblatt to let me read it, and he
promptly did so, asking me to return it to him in a day
or so. The result was I read it very quickly and returned
it to him; but I am very glad you sent it to me because
I have now been able to read it carefully.

I find it very exciting indeed: the people springing
at once into life, and the whole atmosphere and action most
convincing. It would, i think, play extraordinarily well,
for it is full of dramatic movement and sound philosphical
reflection. The characters are certainly interesting in
themselves - the Oscotts; Agatha Chope; that lovely girl
Annie Appleyard; and Rennie; and the delightful Stevens,
the steward; and the Rev. Macdonald. All excellent.

The only characters I didn't wholly believe in were
Crawley and Tripp: to my mind both are overdrawn; your
anti-communism has got the better of you. Haven't you done
the equivalent of the 'bloated capitalist' nonsense perpe-
trated by C.P. writers?

I'm grateful to you for letting me read it: and it has
so much life in it that it is bound to be produced, sooner
or later. If it isn't it'll be disgraceful! I'd love to
be at the first night.

You remember I mentioned to you that I would like to
dramatise Mrs. Martin's Man. Since you left I have been
engaged in doing it, and find that the book falls
naturally into three acts. I have made a first draft of it
and find that the novel was dramatically constructed, and the
characters are a very diversified lot, with Martha of course
coming out the strongest.

If you approve of my proceeding with this I would, of
course, show you the first draft when I get it typed. If
you disapprove, I know you will say so at once.

I have already mentioned to Goldblatt that I was engaged

in this and he says the Group would like to do it.