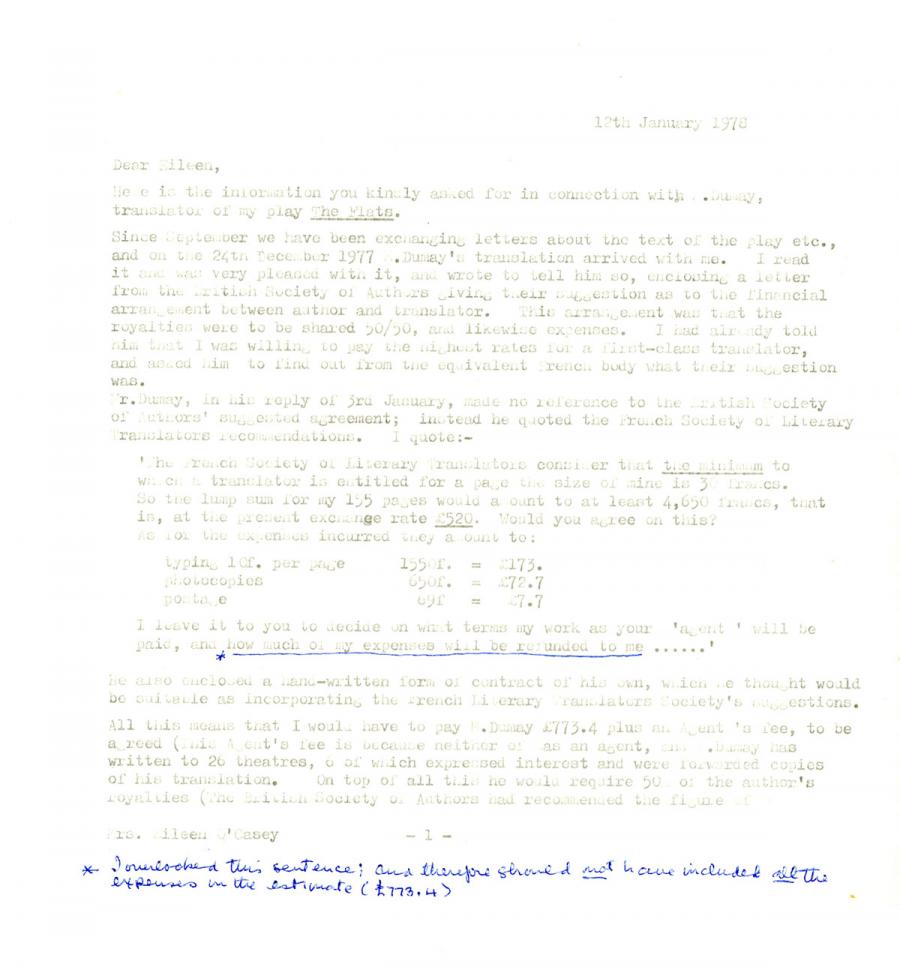 Here is the information you kindly asked for in connection with M.Dumay,
translator of my play The flats.

Since September we have been exchanging letters about the text of the play etc.,
and on the 24th December 1977 M.Dumay's translation arrived with me. I read
it and was very pleased witn it, and wrote to tell him so, enclosing a letter*
from the Bristish Society of Authors giving their suggestions as to the financial
arrangement between author and translator. This arrangement was that the
royalties were to be shared 50/50, and likewise expenses. I had already told
him that I was willing to pay the highest rate for a first-class translator,
and need him to find out from the equivalent french body what their suggestion
was.

Mr.Dumay, in his reply of 3rd January, made no reference to the Bristish Society
of actors' suggested agreement; instead he quoted the French Society of Literary
Translations recommendations. I quote:-

'The French Society of Literary consider that the minimum to
which a translator is entitled for a page the size of mine is 30 francs.
So the lump sum for my 155 pages would amount to at least 4,650 francs, that
is, at the present exchange rate £520. Would you agree to this?
As for the expenses incurred they amount to:

I leave it to you to decide on what term my work as your 'agent' will be
paid, *and how much of my expenses will be refunded to me ......'

He also enclosed a hand-writtem form of contract of his own, which he thought would
be suitable as incorporating the French Literary Society's suggestions.

All this means that I would have to pay M.Dumay £773.4 plus an Agent's fee, to be
agreed(This agent't fee is because neither of us has and agent, and M.Dumay has
written to 26 theatres, 6 of which expressed interest and were forwarded copies
of his translation. On top of all this he would require 50% of the author's
royalties(The British Societ of Authors had recommended the figure of

* I overlooked this sentence and therefore should not have included all the
expenses int the estimate(£773.4)