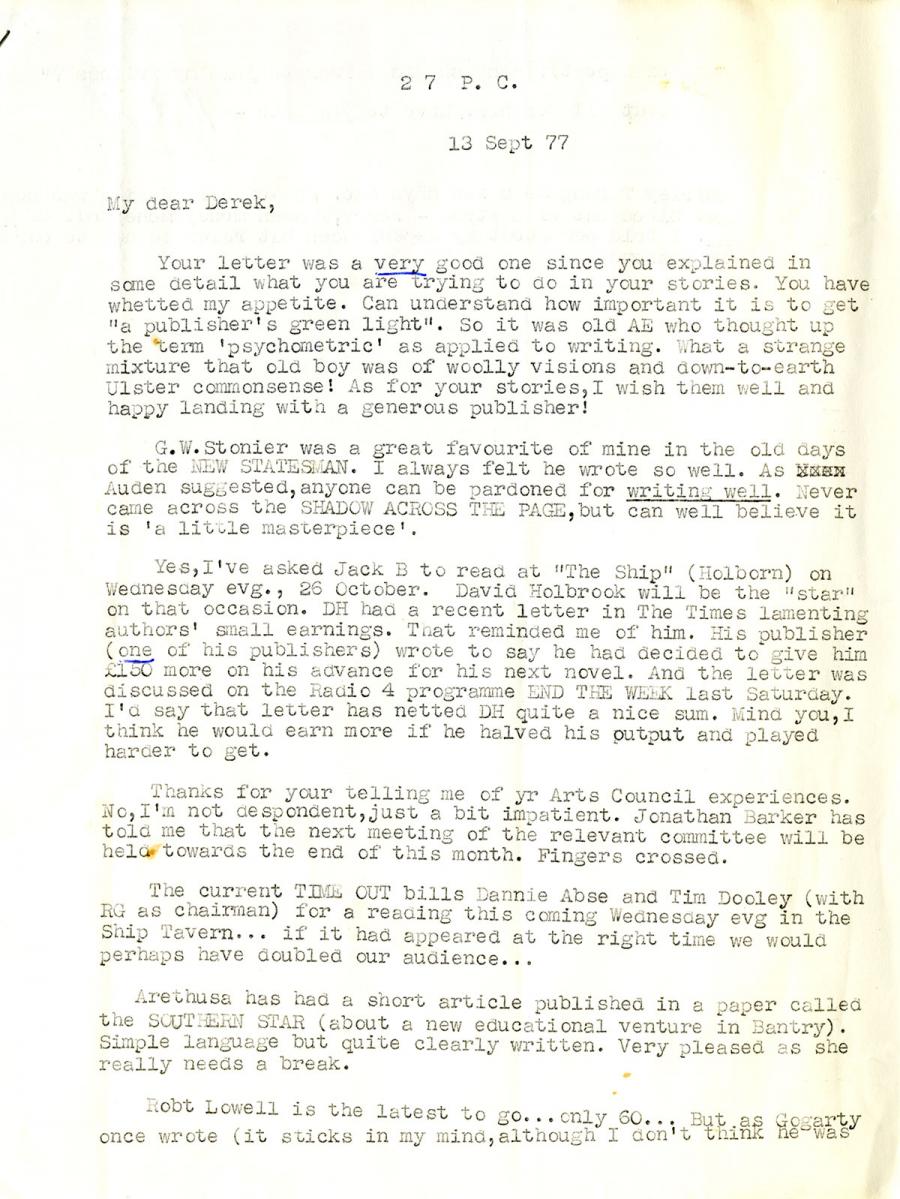 Your letter was a very good one since you explained in
some detail what you are trying to do in your stories. You have
whetted my appetite. Can understand how important it is to get
"a publisher's green light". So it was old AE who thought up
the term 'psychometric' as applied to writing. What a strange
mixture that old boy was of woolly visions and down-to-earth
Ulster commonsense! As for your stories,I wish them well and
happy landing with a generous publisher!

G.W.Stonier was a great favourite of mine in the old days
of the NEW STATESMAN. I always felt he wrote so well. As
Auden suggested,anyone can be pardoned for writing well. Never
came across the SHADOW ACROSS THE PAGE,but can well believe it
is 'a little masterpiece'.

Yes,I’ve asked Jack B to read at "The Ship" (Holborn) on
Wednesday evg., 26 October. David Holbrook will be the "star"
on that occasion. DH had a recent letter in The Times lamenting
authors' small earnings. That reminded me of him. His publisher
(one of his publishers) wrote to say he had decided to" give him
£150 more on his advance for his next novel. And the letter was
discussed on the Radio 4 programme END THE WEEK last Saturday.
I'd say that letter has netted DH quite a nice sum. Mind you,I
think he would earn more if he halved his output and played
harder to get.

Thanks for your telling me of yr Arts Council experiences.
No,I'm not despondent,just a bit impatient. Jonathan Barker has
told me that the next meeting of the relevant committee will be
held towards the end of this month. Fingers crossed.

The current TIME OUT bills Dannie Abse and Tim Dooley (with
RG as chairman) for a reading this coming Wednesday evg in the
Ship Tavern... if it had appeared at the right time we would
perhaps have doubled our audience...

Arethusa has had a short article published in a paper called
the SOUTHERN STAR (about a new educational venture in Bantry).
Simple language but quite clearly written. Very pleased as she
really needs a break.

-;obt Lowell is the latest to go... only 60... But as Groarty
once wrote (it sticks in my mind,although I don't think he was