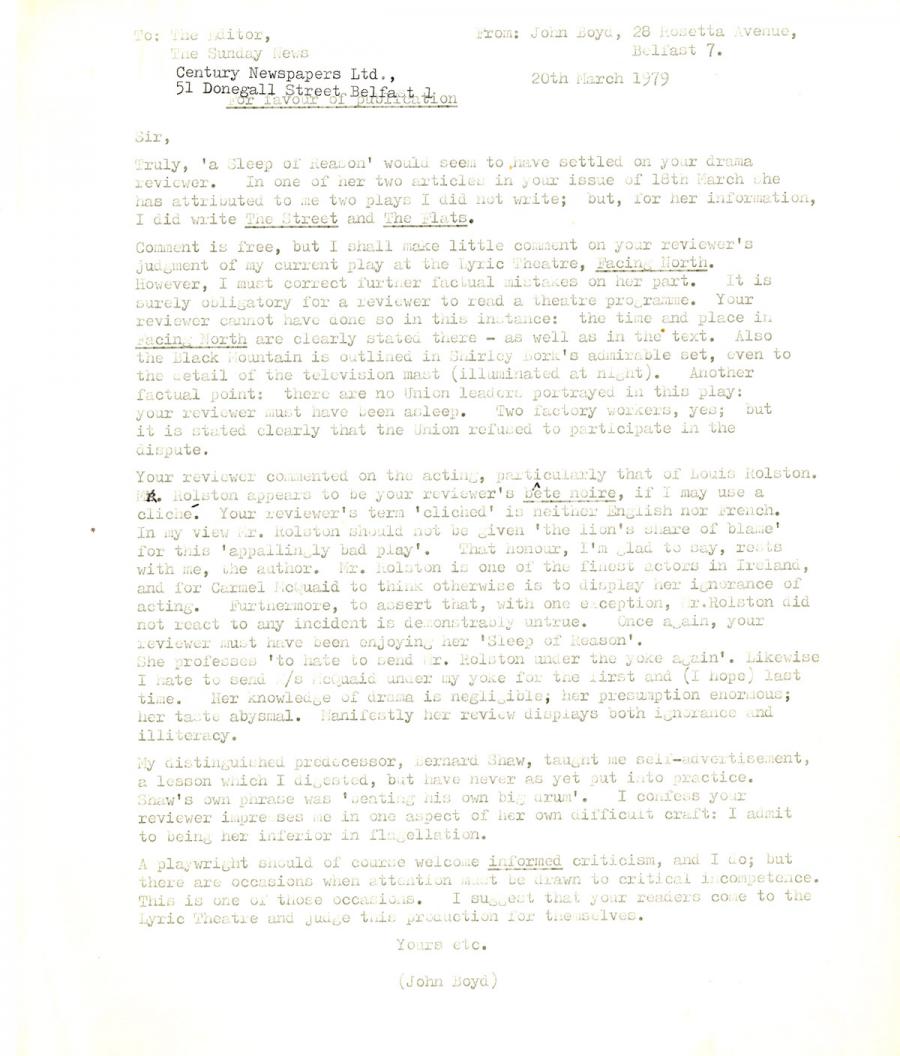 To: The Editor,
The Sunday News
Century Newspapers Ltd.,
51 Donegal Street Belfast 1
For Favour of Publication

Truly, 'A Sleep of Reason' would seem to have settled on your drama
reviewer. In one of her two articles in your issue of 18th March she
has attributed to me two plays I did not write; but, for her information,
I did write The street and The Flats.

Comment is free, but I sha11 make little comment on your reviewer's
judgment of my current play at the Lyric Theatre, Facing North.
However, I must correct further factual mistakes on her part. It is
surely obligatory for a reviewer to read a theatre programme. Your
reviewer cannot have a done so in this instance: the time end place in
Facing North are clearly stated there - as well as in the text. Also
the Black Mountain is outlined in Shirley Bork's admirable set, even to
the detail of the television mast (illuminated at night). Another
factual point: there are no Union leaders portrayed in this play:
your reviewer must have been asleep. Two factory workers, yes; but
it is stated clearly that tne Union refused to participate in the
dispute.

Your reviewer commented on the acting, particularly that of Louis Rolston.
Mr. Rolston appears to be your reviewer’s bete noire, if I may use
cliche. Your reviewer's term 'cliched' is neither English or French.
In my view Mr. Rolston should not be given the lion's share of blame'
for this 'appallingly bad play'. That honour', I'm glad to say, rests
with me, the author. Mr, Rolston is one of the finest actors in Ireland,
and for Carmel McQuaid to think otherwise is to display her ignorance of
acting. Furthermore, to assert that, with one exception, r.Rolston did
not react to any incident is demonstrably untrue. Once again, your
reviewer must have been enjoying her 'Sleep of Reason'
She professes ' to hate to send r. Holsten under the yoke again'. Likewise
I hate to send M/s .McQuaid under my yoke for the first and (I hope) last
time.Her knowledge of drama is negligible; her presumption enormous;
her taste abysmal. Manifestly her review displays both ignorance and
illiteracy.

My distinguished predecessor, Bernard Shaw, taught me self- advertisement,
a lesson wiiich I digested, but have never as yet put into practice.
Shaw's own phrase was 'beating his own big drum'. I confess your
reviewer impresses me in one aspect of her own difficult craft: I admit
to being her inferior in flagellation.

A playwright should of course welcome informed criticism, and I do; but
there are occasions when attention must be drawn to critical imcompetence.
This is one those occasions. I suggest that your readers come to the
Lyric Theatre and judge this production for themselves.