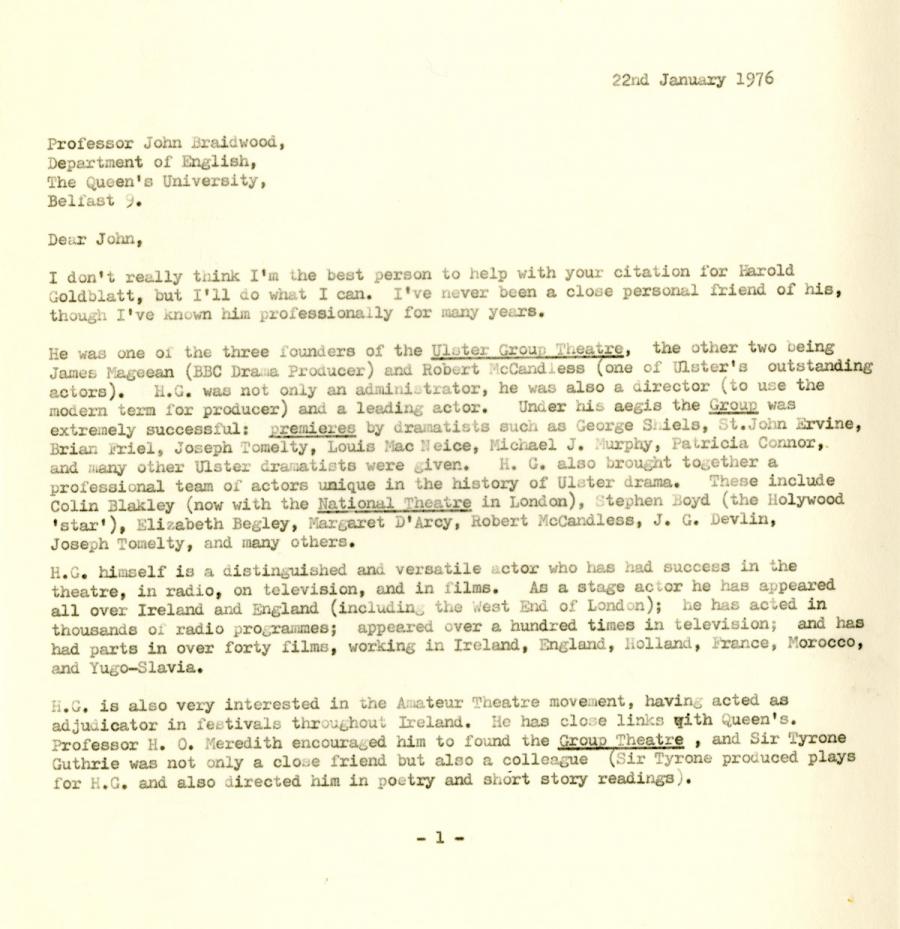 I don’t really tnink I'm the best person to help with your citation for Harold
Goldblatt, but I'll do what I can. I've never been a close personal friend of his,
though I've known him professionally for many years.

He was one of the three founders of the Ulster Group Theatre. Rhe other two being
James Mageean (BBC Drama producer) and Robert McCandless (one of Ulster's outstanding
actors). H.G. was not only an administrator, he was also a director (to use the
modern term for producer) and a leading actor. Under his aegis the Group was
extremely successful: premieres by dramatists such as George Shields, St.John Ervine,
Brian Friel, Joseph Tomelty, Louis MacNeice, Michael J. Murphy, Patricia Connor,
and many other Ulster dramatists were given. H. G. also brought together a
professional team of actors unique in the history of Ulster drama. These include
Colin Blakley (now with the National Theatre in London), Stephen Boyd (the holywood
'star'), Elizabeth Begley, Margaret D'Arcy, Robert McCandless, J. G. Devlin,
Joseph Tomelty, and many others.

H.G. himself is a distinguished and versatile actor who has had success in the
theatre, in radio, on television, and in films. As a stage actor he has appeared
all over Ireland and England (including the West End of London); he has acted in
thousands of radio programmes; appeared over a hundred times in television; and has
had parts in over forty films, working in Ireland, England, Holland, France, Morocco,
and Yugo-Slavia.

H.G. is also very interested in the Amateur Theatre movement, having acted as
adjudicator in festivals throughout Ireland. He has close links with Queen's.
Professor H. 0. Meredith encouraged him to found the Group Theatre , and Sir Tyrone
Guthrie was not only a close friend but also a colleague (Sir Tyrone produced plays
for H.G. ana also directed him in poetry and short story readings).