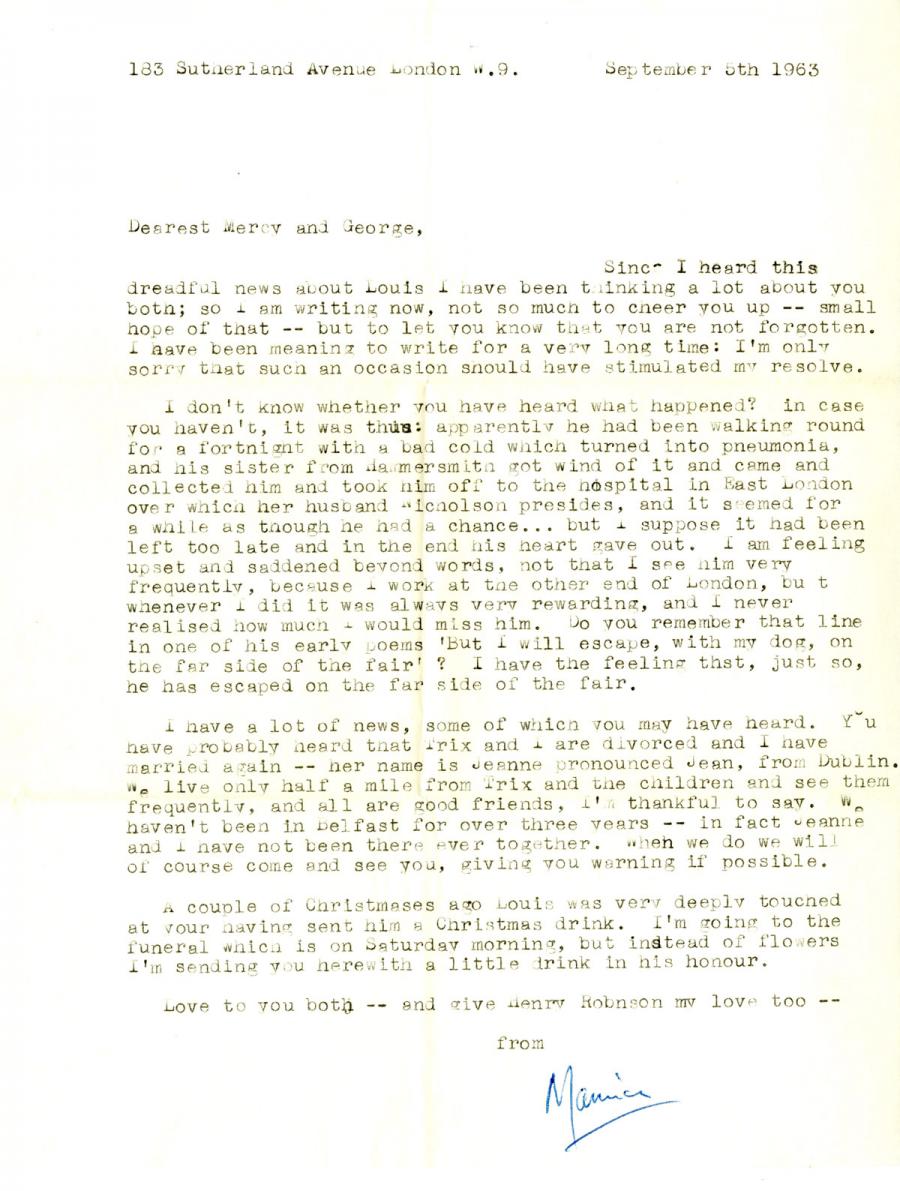 183 Sutherland Avenue London W.9
September 5th 1963
Dearest Mercy and George, Since I heard this dreadful news about Louis I have been thinking a lot about you both; so I am writing now, not so much to cheer you up – small hope of that – but to let you know that you are not forgotten. I have been meaning to write for a very long time: I'm only sorry that such an occasion should have stimulated my resolve. I don't know whether you have heard what happened? In case you haven't, it was thus: apparently he had been walking round for a fortnight with a bad cold which turned into pneumonia, and his sister from Hammersmith got wind of it and came and collected him and took him off to the hospital in East London over which her husband Nicholson presides, and it seemed for a while as though he had a chance...but I suppose it had been left too late and in the end his heart gave out. I am feeling upset and saddened beyond words, not that I saw him very frequently, because I work at the other end of London, but whenever I did it was always very rewarding, and I never realised how much I would miss him. Do you remember that line in one of his early poems 'But I will escape, with my dog, on the far side of the fair'? I have the feeling that, just so, he has escaped on the far side of the fair. I have a lot of news, some of which you may have heard. You have probably heard that Trix and I are divorced and I have married again – her name is Jeanne pronounced Jean, from Dublin. We live only half a mile from Trix and the children and see them frequently, and all are good friends, I'm thankful to say. We haven't been in Belfast for over three years – in fact Jeanne and I have not been there ever together. When we do we will of course come and see you, giving you warning if possible. A couple of Christmases ago Louis was deeply touched at your having sent him a Christmas drink. I'm going to the funeral which is on Saturday morning, but instead of flowers I'm sending you herewith a little drink in his honour. Love to you both – and give Henry Robinson my love too – from Maurice