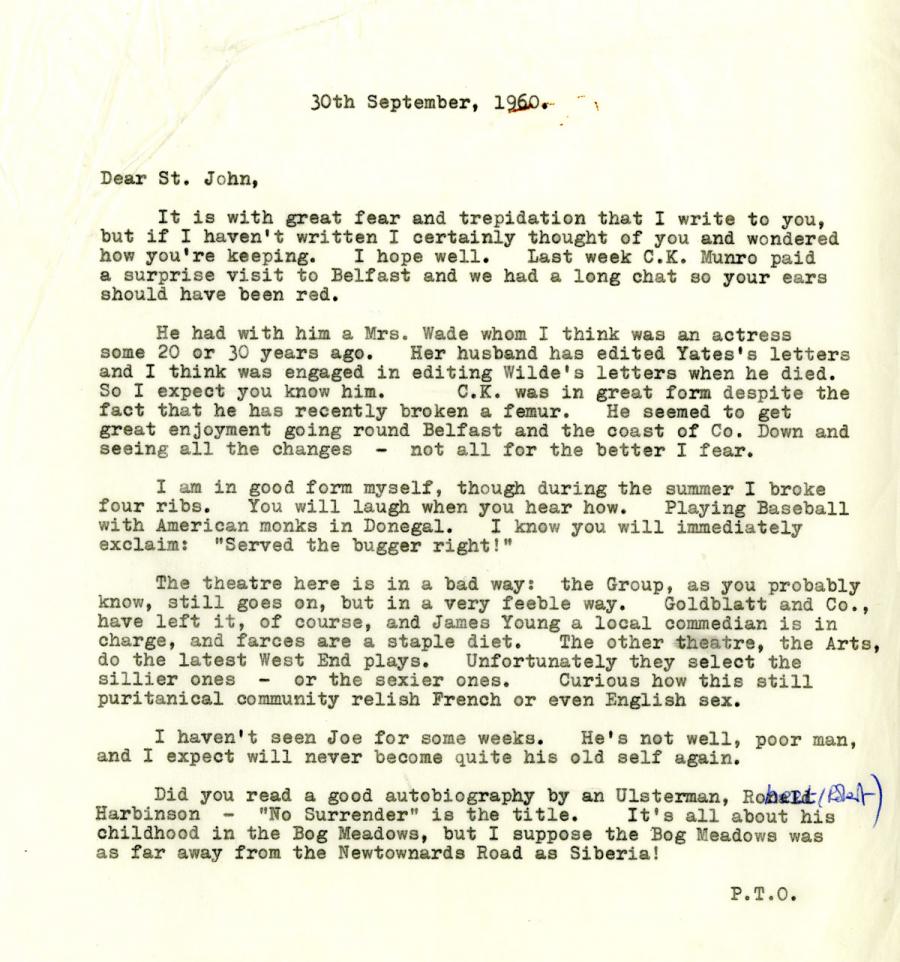 It is with great fear and trepidation that I write to you,
but if I haven't written I certainly thought of you and wondered
how you’re keeping. I hope well. Last week C.K. Munro paid
a surprise visit to Belfast and we had a long chat so your ears
should have been red.

He had with him a Mrs. Wade whom I think was an actress
some 20 or 30 years ago. Her husband has edited Yates's letters
and I think was engaged in editing Wilde's letters when he died.
So I expect you know him. C.K. was in great form despite the
fact that he has recently broken a femur. He seemed to get
great enjoyment going round Belfast and the coast of Co. Down and
seeing all the changes - not all for the better I fear.

I am in good form myself, though during the summer I broke
four ribs. You will laugh when you hear how. Playing Baseball
with American monks in Donegal. I know you will immediately
exclaim: "Served the bugger right!"

The theatre here is in a bad way: the Group, as you probably
know, still goes on, but in a very feeble way. Goldblatt and Co.,
have left it, of course, and James Young a local commedian is in
charge, and farces are a staple diet. The other theatre, the Arts,
do the latest West End plays. Unfortunately they select the
sillier ones - or the sexier ones. Curious how this still
puritanical community relish French or even English sex.

I haven't seen Joe for some weeks. He's not well, poor man,
and I expect will never become quite his old self again.

Did you read a good autobiography by an Ulsterman, Robert
Harbinson - "No Surrender" is the title. It's all about his
childhood in the Bog Meadows, but I suppose the Bog Meadows was
as far away from the Newtownards Road as Siberia!